Burning for biodiversity – the benefits of Indigenous fire management

How does burning help Nolia Napangarti and her sister and the country they live on? Dr Rachel Paltridge, ecological consultant for the Kiwirrkurra Indigenous Protected Area, talks about how fires work for country in the Central Desert, Western Australia.

When Nolia Napangarti and her sister Yalti decide to go hunting, they grab three things – their crowbars, some water and a box of matches. Family back in Kiwirrkurra follow their movements through the course of the day by watching the plumes of smoke that periodically rise into the sky, dissipate and soon disappear.

Their country lies in the Great Sandy Desert, on the edge of Lake Mackay. It is dominated by spinifex, spikey hummocks of grass that can form almost impenetrable thickets when left unburnt for decades.  These dense stands of old-growth spinifex rarely produce seed however, they do support an abundance of termites, which form the base of the food chain for an astonishing diversity of reptiles and some mammals. In turn, small reptiles that feed on termites are preyed upon by larger reptiles such as the Sand Goanna, for which Nolia and Yalti regularly hunt. 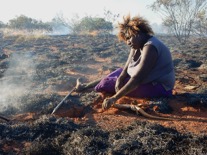 For animals that don’t live in deep burrows, spinifex vegetation provides protection from predators and from extreme temperatures. Certain species, including the Desert Mouse, Wongai Ningaui, Jewelled Gecko, Striated Grasswren and Night Parrot, rely on old-growth spinifex hummocks  for shelter. Even for species that do have burrows, the presence of spinifex reduces visibility to predators, including dingoes, foxes and cats, as well as human predators. For Nolia and Yalti, it is much easier to hunt goannas in freshly burnt country than in thick old spinifex that is uncomfortable to walk through and has poor visibility.

Hence the matches. Small sections of spinifex are burnt, and as soon as the ash is cool enough to walk upon, the women start searching for goanna burrows. When a burrow is located, a series of prods with the crowbar reveals the precise position of the chamber and, within minutes, a goanna has been procured.

If Nolia feels hungry when she’s out hunting, she’ll revisit a patch of country burnt in the last year or two to look for desert raisins. In comparison to the monoculture of old-growth spinifex, the recent firescars are veritable gardens, as long as sufficient rain has occurred since the fire. Short-lived grasses emerge and produce an abundance of seed within six months of fire, and these are followed by other ephemeral flowering plants, several of which produce sweet, fleshy fruits. The seeds, flowers and fruits attract a range of grain and insect eating species of ants, birds and mammals. Nolia and Yalti grew up on seedcake that their mother made by grinding seed, which had been collected from firescars in wooden coolamons. This fire-promoted grass remains a staple food source for bilbies in spinifex country, providing a direct link between Indigenous burning practices and the persistence of bilbies.

If fresh cat tracks are seen when the women are out hunting they are followed with great enthusiasm. If the cat retreats to the shelter of old-growth spinifex, again fire is the tool used to flush the quarry, and complete the hunt. And so the day passes – walking, burning, tracking, chasing and digging until the women have found enough food to take home to feed their families.

Fires lit while hunting on foot generally don’t burn far, especially during the cooler months. Fires tend to peter out after a few hundred metres, either because the temperature is too cool, the spinifex too green, or it reaches the edge of a more recently burnt patch.

Despite their small size, even fires only 100 metres wide are visible from satellite imagery, allowing burning patterns to be mapped in fine detail. Firescar mapping around Kiwirrkurra revealed that 516 fires occurred within a 20km radius of Kiwirrkurra from 2010 to 2015, and that the median fire size was only 4.6 hectares. By comparison, in the adjacent country to the north, which is out of reach of the Kiwirrkurra hunters, 13 lightning-induced wildfires occurred over the same five-year period, with an average size of over 8,000 hectares. These fires affected 76 percent of the land, and typically occurred during the hottest, windiest times of the year.

Somewhat paradoxically, the frequent burning around Kiwirrkurra between 2010 and 2015 actually resulted in less fire-affected country – only 27% of the 150,000 hectares.