Analysis into the social return on investment of Indigenous Protected Areas in four corners of Australia have demonstrated the incredible value of Indigenous land and sea management programs on environmental, social and cultural outcomes.

Commissioned by the Department of Prime Minister and Cabinet and undertaken by Social Ventures Australia, the analysis showed a return on investment of up to $3.40 for every dollar spent, with the greatest outcomes on country where the Indigenous ranger program also runs.

The Country Needs People campaign is calling on the government to pay attention to their own reports detailing the success of Indigenous rangers and Indigenous Protected Areas. 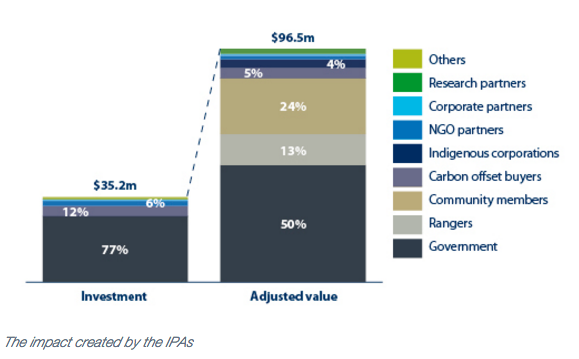 In remote West Arnhem Land, on 1.4 million hectares of Indigenous-owned land adjoining Kakadu National Park, there is a small clearing where visionary local leader and accomplished artist, Bardayal ‘Lofty’ Nadjamerrek, painted some of his last rock art before his death in 2009.

This clearing is one of thousands of rock art sites on the Warddeken Indigenous Protected Area (IPA), which is managed by Nawarddeken people in accordance with their priorities, with Federal Government support.

While most of Lofty’s more recent art is relatively well preserved, older sites have been badly damaged by buffalos and dangerous wildfires. When Nawarddeken left the land for nearby towns more than 50 years ago, feral animals and wildfires took hold of country that was no longer actively managed. Today, Warddeken IPA rangers are helping to bring back healthy country and preserve important heritage sites, including Lofty’s rock art.

Sign our petition calling on your local candidates to prioritise the growth and security of Indigenous ranger jobs.