The future of the golden-shouldered parrot depends on the level of support given to the good work of Olkola land management.

The golden-shouldered parrot is a beautiful, colourful and endangered parrot that is restricted to two small regions in Cape York Peninsula. The parrot, called Alwal by Traditional Owners, is a totemic species for the Olkola people, who own and manage much of the bird’s remaining habitat in central Cape York. The endangered parrot is threatened by habitat decline due to reduced fire frequency, habitat damage by feral animals, and predation by feral cats and other animals. With Bush Heritage Australia, Olkola Land Managers are monitoring Alwal populations, reducing threats and improving habitat conditions by re-instating natural and traditional fire regimes. 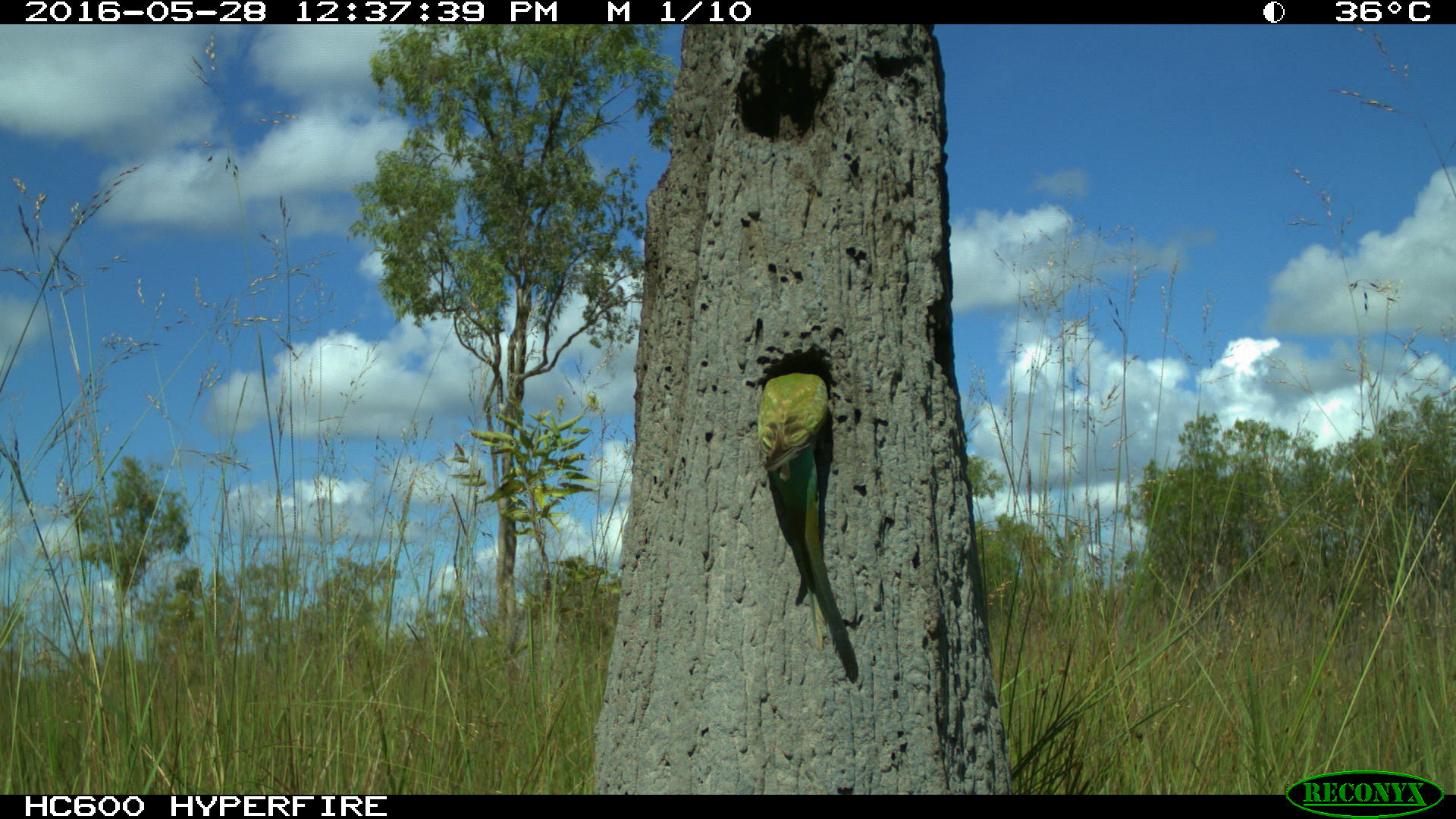 The golden-shouldered parrot (Psephotus chrysopterygius) – or Alwal, as it is known to the Olkola people, the Traditional Owners of its habitat stronghold – is a bright, multi-coloured parrot with a turquoise breast, black crown, red belly and large, bright yellow patches on its wings. Golden-shouldered parrots build nests and raise young in tall, old termite mounds.

Once seen in large flocks, it is estimated that only 2000 golden-shouldered parrots now survive in the wild. Its closest relative, the paradise parrot, has already gone extinct. Alwal is listed under the federal government’s Environment Protection and Biodiversity Conservation Act as Endangered in Australia and is one of 20 endangered birds prioritised for action in Australia’s Threatened Species Strategy (Australian Government, 2016). The landscape-scale habitat improvement project led by Olkola and Bush Heritage Australia to secure the future of Alwal has recently been included in the government’s new endangered species investment prospectus.

The species is threatened by many factors (Garnett and Crowley 2002), including: 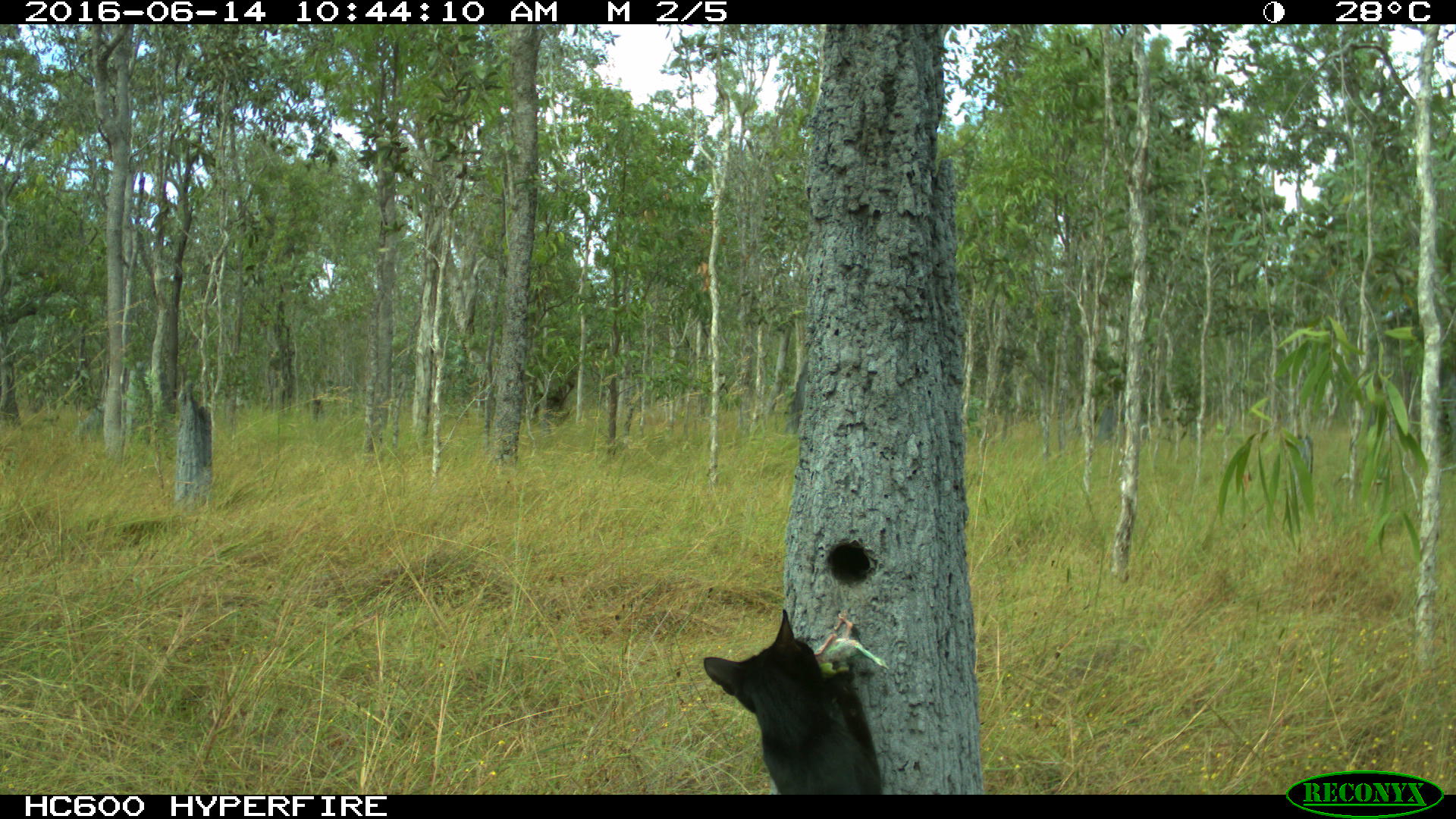 Olkola cameras captured feral cat predation of Alwal nestlings for the first time - this has led to important research and management challenges and opportunities. In 2017 trialling feral cat abatement strategies is a key focus.

Alwal is a totem animal for the Olkola people, who are committed to ensuring its survival. Olkola people are working in partnership with Bush Heritage Australia (BHA 2016) to maximise the pooled benefits from traditional Indigenous knowledge and mainstream science. Together, Olkola and Bush Heritage are undertaking a wide range of strategic activities – all identified in the species recovery plan – to ensure the survival of the golden-shouldered parrot, including:

Olkola and Bush Heritage are working closely together on the ground for this particular project, and currently Bush Heritage is the sole funder. Imagine how much more we could do – expanding this project, supporting Olkola to lead new ones—  if wages for Land Managers were covered with secure long-term government funding! The additional outcomes Olkola could achieve would be phenomenal.” - Allana Brown, Bush Heritage Australia.

Using handheld GPS devices, Olkola Land Managers mapped the locations of nest sites during comprehensive surveys in 2016. Only 53 nests were detected, which is less than half the number recorded seven years earlier (Olkola and Bush Heritage Australia, 2016). This finding underscores the need for more resources to protect this endangered species.

In an important breakthrough, remote monitoring cameras used by the Olkola Land Managers in 2016 provided the first photographic evidence that golden-shouldered parrots in nest hollows are being killed by feral cats.

While federal programs such as the Indigenous Protected Areas program could provide vital strategic support to Olkola land management and governance, current funding is fully subscribed and growth in funding would be required to enable groups like Olkola to apply.

In addition to their important work protecting Alwal, Olkola have developed a Healthy Country Plan that clearly outlines strategies to achieve other major conservation successes and build a sustainable conservation-based economy for the Olkola people. This plan represents the aspirations and responsibility identified by Olkola Traditional Owners to keep country healthy as a whole in order to protect wildlife.

On very limited resources the work that landowners like Olkola have done is proving critical in fighting extinctions of endangered species from Australia. The Olkola Land Managers, in partnership with Bush Heritage, are already achieving early wins in the long-term management challenges that face them in their work to secure the future of their totem, the endangered Alwal. However, the scale of this challenge is enormous and more resources will be required to improve Alwal’s grassland and savanna habitat, reduce threats and boost population numbers.

Further support and security for both Indigenous Protected Areas and Rangers could create the tools for Olkola and their partners to ensure its survival for all Australians into the future. 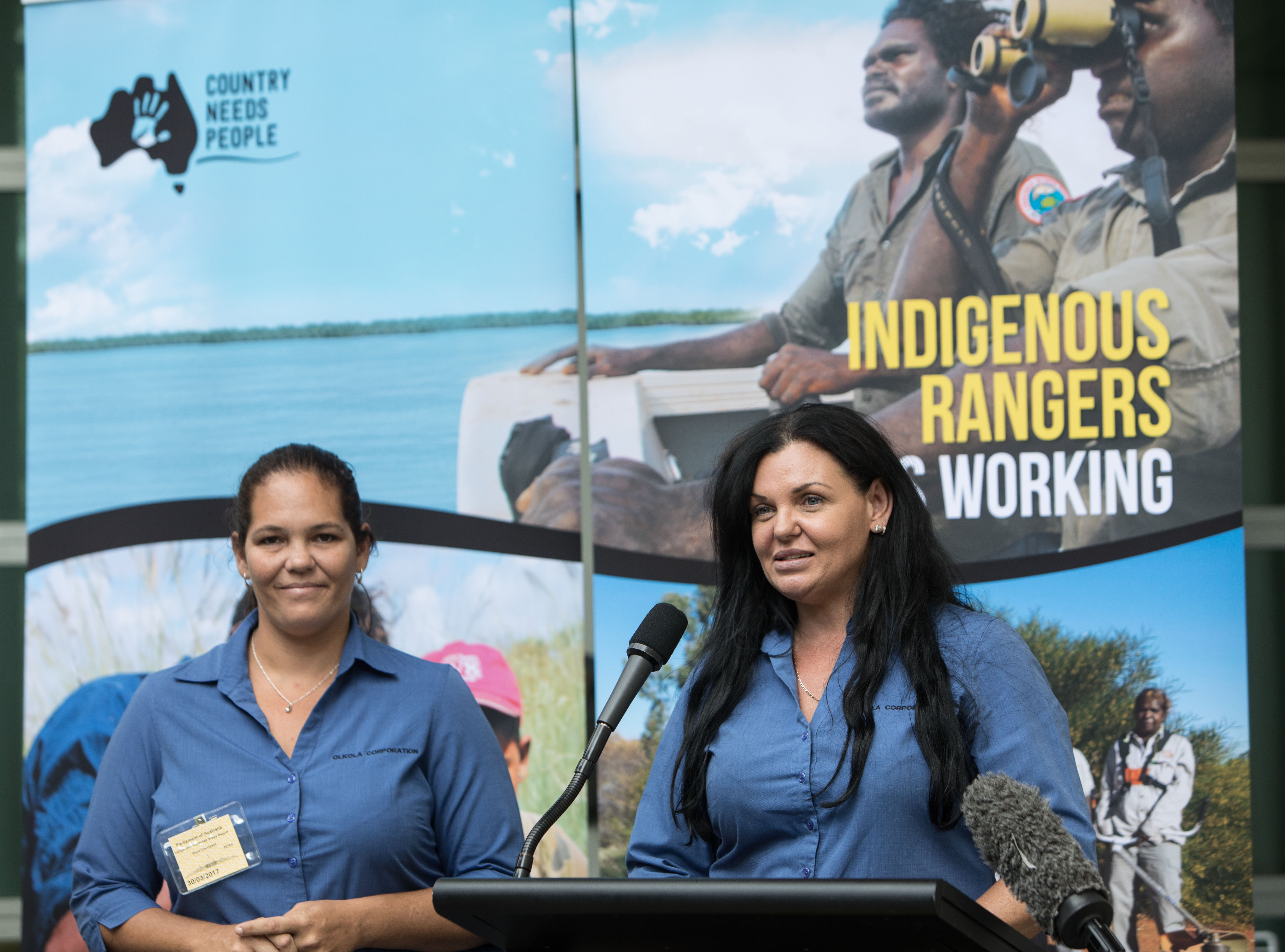 Olkola ranger Tish Ross and CEO Debbie Symonds launching the Protecting nature for all of us report in Parliament House.