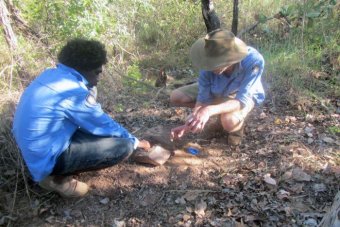 Photos from cameras hidden by Dambimangari rangers reveal Chambers Island is home to animals including the northern quoll and the golden-backed tree rat.

Indigenous rangers are excited about the discovery of several threatened animal species on a remote island off the Kimberley coast.

Dambimangari rangers hid five motion-activated cameras on Chambers Island near the Buccaneer Archipelago, an area that has never before been surveyed.

The island is within the Dambimangari native title exclusive possession area.

Photos from the cameras revealed the island was home to animals including the northern quoll and the golden-backed tree rat.

Ranger Kieran Bangmorra said it was exciting downloading the data from the cameras.

"I was pretty surprised, there are lots of different varieties of animals on the island. I was a bit surprised to see the golden-backed tree rat," he said.

The discovery means the island could become a breeding ground away from the destructive cane toad, which is currently moving west across the Kimberley.

"It could provide a safe haven for when the cane toads come over and possibly provide refuge," Mr Bangmorra said.

"We will monitor that [island] for about a year and try to get numbers and the situation."

"We have dreaming [stories] and some of these animals, especially the northern quoll, plays a role in the stories for us," he said.

PHOTO: A northern quoll caught on a hidden camera on Chambers Island off the Kimberley coast.(Supplied: Dambimangari Aboriginal Corporation)

"One part of the stories is the creation of a particular part of the Dambimangari country.

"The other is the grieving process for a woman when her husband dies.

"If [the quoll] was to become endangered or extinct it will really hurt not only our older generation but our younger generation as well.

"We'll still have the story but it will take away a big part of our culture."

The Department of Parks and Wildlife carries out similar work on some Kimberley islands, but this project was managed by Dambimangari rangers, in keeping with their Healthy Country Plan.

Mr Umbagai said like the animals, the islands were important to the Dambimangari for different reasons.

PHOTO: A golden-backed tree rat on Chambers Island near the Buccaneer Archipelago off the Kimberley coast.(Supplied: Dambimangari Aboriginal Corporation)

"Most of the islands we have along that Buccaneer Archipelago are special to us," he said.

"Every island plays a different role in what our people used to do.

"We'd use an island at a particular time of the season of the year to do a cultural event or corroboree and in the wet season we'd use another island to shelter from rain."

For that reason he said, it was important for the rangers to carry out the survey and maintenance work.

"It gives us the opportunity to go back to country and work on our country at the same time because obviously we moved from there a long time ago but ... [we] have a chance to show some of the younger guys who haven't been out to their country, some of the animals we don't see around here."