“Our long-term goal has been to stand on our own two feet and take responsibility for managing our traditional lands.”

Over the past six years, Ngadju Conservation has been recognised by the Commonwealth Government as a remarkable success story.

For the next stage of the program, Ngadju Conservation Aboriginal Corporation has received $696,000 through the Indigenous Advancement Strategy. This is to assume overall management of the program and its expansion into a community based ‘on country’ ranger skills training and employment ready program.

“We have valued the ongoing support provided by Gondwana Link, The Pew Charitable Trusts and Rangelands NRM over the past six years,” Les Shultz said.

“This has enabled us to build the program and our capacity to the stage where Ngadju Conservation can drive and manage the next important phase ourselves.”

“Working with Les Schultz over the past six years assisting Ngadju to develop land management strategies and establishing the Norseman based Ngadju Ranger program has been an incredible and fulfilling journey,” Mr Price said. 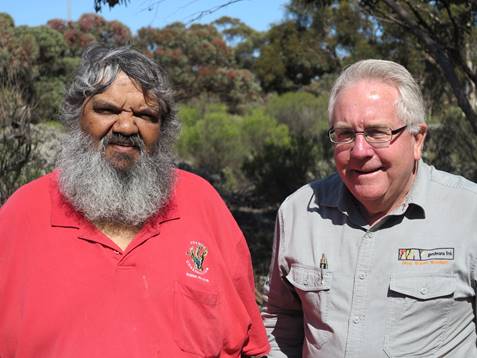 The area includes a substantial portion of the southern goldfields that extends from the wheatbelt out past Cocklebiddy on the Nullarbor.

The financial assistance provided by the Commonwealth for 2017/2018 aligns the Ngadju Conservation program with the other Commonwealth funded Ranger programs. The government has currently committed to extend Indigenous ranger contracts to 2020, and Country Needs People is calling for better security and a funding forecast to at least 2023.

“I thank our Elders, fellow Ngadju and the community for supporting and participating in the planning process to get to this stage,” Mr Schultz said.

“I also express our appreciation to Minister Scullion and the Department of Prime Minister and Cabinet team in Perth for their belief in our desire and ability to manage our country.”

Rangelands NRM CEO Dr Gaye Mackenzie said, “This is exactly what we hope to achieve when we support indigenous groups through providing project based work.”

“It is our intention that the groups we work with become self-sustaining and self-driven, and we eventually put ourselves out of a job.”

“Ngadju Conservation are a great example of this.”

Ngadju Rangers monitor wildlife using a motion detecting camera so they can better understand the population dynamics and threats to native animals on Ngadju country.