The Thamarrurr Ranger Group – who patrol close to 18 000 square kilometres including 200 kilometres of coastline and represent over 20 clan groups in northwest Northern Territory – are the latest organisation to add their support to the Country Needs People campaign.

The Thamarrurr Rangers also work on the Mari Jabin Indigenous Protected Area, which covers almost 70 000 hectares. Marri-Jabin IPA is recognised nationally for its many significant species, including the vulnerable red goshawk, the water mouse and the endangered northern quoll. The region's floodplains and wetlands support up to 500 000 magpie geese and its wetlands are recognised as nationally important. Estuarine crocodiles breed on the floodplains and vulnerable flatback and endangered olive ridley turtles nest along the beaches.

By joining the alliance, the Thamarrurr Rangers are signalling their support for the call to grow Indigenous ranger jobs and Indigenous Protected Areas for the long term.

A recent example of the great work being done by the Thamarrurr Rangers is the two day ‘Walk on Country’ event held in August. 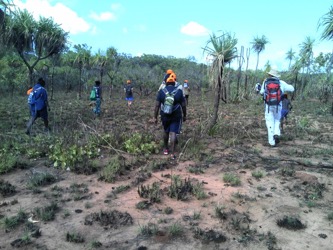 The walk had benefits for people and country. It gave traditional owners an opportunity to access their country and cultural sites, and promoted healthy lifestyle choices. It also included a turtle survey at Kuy Peninsula and marine debris collection along the Yederr – Kuy coastline.

Another walk is being planned for 2017 from Perederr to Tjindi.

This kind of work demonstrates one of the successes of Indigenous Rangers and Indigenous Protected Areas across Australia in ensuring elders and younger community members can connect with country.  Younger people learn more about their culture, senior Traditional Owners are reassured that Rangers are working respectfully around important places, and that helps make a stronger community approach to protecting land and sea into the future.