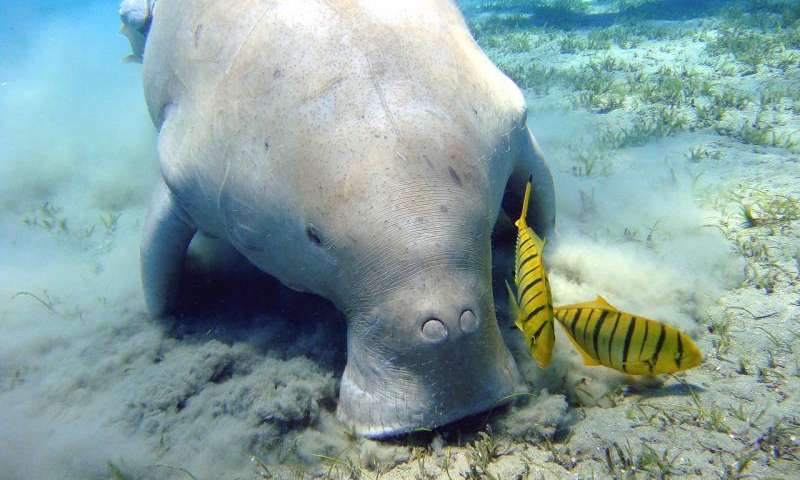 Aboriginal rangers have joined forces with scientists to determine for the first time the distribution and abundance of dugongs that inhabit the Kimberley's remote waters.

Aboriginal rangers have joined forces with scientists to determine for the first time the distribution and abundance of dugongs (Dugong dugon) that inhabit the Kimberley's remote waters and act as a food source for indigenous people.

Together CSIRO, the Western Australian Marine Science Institution (WAMSI), and four Kimberley Aboriginal organisations recently took to the skies to conduct aerial surveys of dugongs—a shy marine mammal that is said to have sparked the legend of mermaids.

The information gleaned from the surveys will provide will provide a baseline from which they can create management strategies to help conserve dugongs in the future, according to CSIRO oceans and atmosphere researcher Peter Bayliss.

The Kimberley dugong population is both environmentally and culturally important, Mr Bayliss says.

"There is a deep cultural knowledge of dugongs in the Kimberley and this will be combined with scientific knowledge for their future management.

Dugongs are listed globally as 'vulnerable to extinction' and northern Australia and Torres Strait are thought to be home to the largest remaining healthy populations in the world. However, until now the Kimberley was one of the few areas that had not been subject to scientific survey.

They then put these skills into practice by boarding a Gippsland G8 Airvan to survey dugongs by flying east-west transect lines over about 30,000 square kilometres of coastal waters—an area nearly half the size of Tasmania.

The survey plane flew at a constant height and speed to obtain consistent counts—152m above the water and 185 kilometres per hour—with participants counting dugongs sighted within a 200m strip on each side of the aircraft.

The aerial surveying course and surveys are part of the WAMSI Kimberley Marine Science Program's Dugong Management project being run through the Coastal Program of the CSIRO Oceans and Atmosphere Flagship.