Some background about feral cat management

Country Needs People recently posted on our social media channels about the work many Indigenous ranger groups are doing to control the number of feral cats on country. Rangers undertake strategic and humane feral cat culling to reduce their predatory impact on native wildlife.

There was a range of responses to the social media posts. Most people were supportive (Country Needs People supporters are the best), saying “More rangers, less ferals!” and “At least double [Indigenous ranger] jobs as feral cats are causing havoc.”

There were also a few of supporters who were dismayed Indigenous rangers were culling feral cats. “Instead of killing feral cats”, they said, “we should be focussing on teaching responsible cat ownership,” or, “We should trap, desex and rehome these cats. Not cull them.”

Whilst we understand the sensitivity around cats – after all, cats are humans’ second most popular animal companion – I thought I might clear up some misunderstandings, so Country Needs People supporters understand why the work Indigenous rangers do to control feral cats is so important for the health of our Outback. 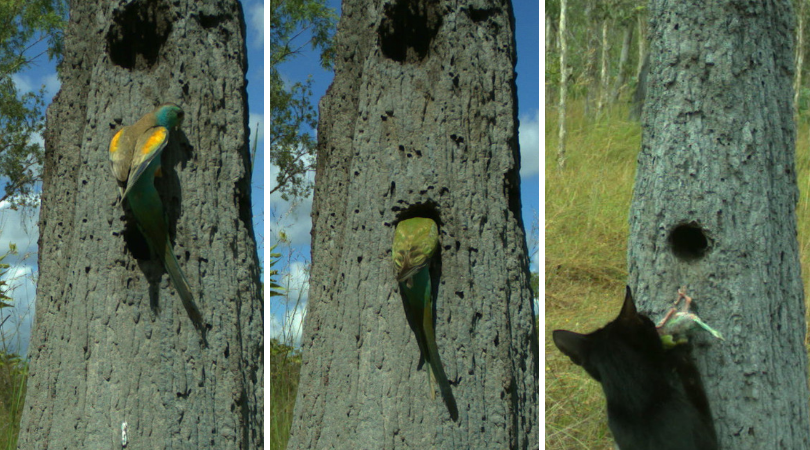 Image: A feral cat predating on an endangered golden-shouldered parrot (Alwal).
Read more about the work the Olkola Indigenous rangers are doing to protect their totem animal.

It is hard to get an exact number for the population of feral cats in Australia, but the most recent estimates put the population between 2.1 and 6.3 million. The population rises and falls depending on rainfall. This population is self-sustaining, it does not require ‘top-up’ from domestic cats being released to the wild.

We agree that responsible cat ownership (desexing cats, keeping cats safe and inside, etc.) is extremely important for protecting wildlife in urban and rural areas. However, it will do very little to control the population of feral cats that exist in remote parts of Australia.

Feral cats kill an estimated 466 million reptiles and 377 million birds in Australia every year. While there are few estimates for the number of mammals, the federal government’s threatened species strategy recognises feral cats as a key driver for mammal extinctions.

To combat this pressure on our native wildlife, Indigenous rangers around Australia work to control the populations of feral cats on country. Methods vary, but the most common ways rangers control feral cat numbers are shooting, trapping, baiting, fire management and hunting. Indigenous rangers work with governments, scientists and pest management professionals to ensure all cat population control is as strategic and as humane as possible.

Some voices in the media call for feral cats to be trapped and euthanised or sterilised as the main form of population control. This was also suggested by some of the dismayed Country Needs People supporters.

Trapping can be an effective measure to control feral cat populations and is used across Australia. However, it should not be the only technique used. Trapping requires multiple trips to the same location to set, check and remove the traps. This means traps can only really be used near roads and tracks. As such, trapping is used alongside the other management techniques listed above.

Sterilisation (or “trap, neuter, rehome/release) adds another layer of complexity to the task. Rangers would have to collect the feral cat from a trap and take it to a vet to be sterilised and then rehomed or returned to the environment. Aside from having been shown not to work overseas, sterilisation was determined by Australia’s Threatened Species Commissioner to be neither humane, effective or justifiable.

More effective and humane tools are always being developed to control feral cat numbers. The federal government is working on new baiting and trapping methods and the CSIRO is partnering with the Australian Wildlife Conservancy to genetically modify cats to only produce male offspring. These will be powerful tools in the fight to control feral cat populations, but they will have to be used alongside current management strategies.

Decreasing feral cat numbers can be difficult, however, it has been shown to lower the predatory pressure on native animals and is essential for the protection of some of Australia’s most critically endangered wildlife. Indigenous rangers around Australia will keep working to reduce the number of feral cats so that our most endangered native animals can continue to exist.