From The Guardian, Helen Davidson, 12 November 2015

A new report hails the best Indigenous initiatives run by government and recommends their expansion.

Djami Marika stood at the edge of a pristine Arnhem Land beach and shook his head at the boat moored across the channel.

“There are campers here and they have their permit and they’ve helped out with some cleaning, but behind us we have a boat that shouldn’t be here,” he said, frustrated that the vessel’s registration number wasn’t visible and concerned at what damage its occupants might do.

“The boats catch fish and they fillet the fish, chuck it outside here and the crocodiles come. It’s dangerous, very dangerous,” he said, pointing to the sign displaying a warning in English and Yolngu Matha.

Marika is managing director of the Dhimurru Aboriginal Corporation which cares for more than half a million hectares of Yolngu land and – uniquely – sea in north-east Arnhem Land, dedicated by traditional owners under an Indigenous protected area (IPA).

Rangers are employed under the Working On Country program, and a reportreleased Thursday has called for its expansion, along with the program which manages the IPAs, deeming them to be among the most successful Indigenous initiatives ever run by the federal government.

The land and wildlife under Dhimurru’s IPA is diverse, from rocky islands and coral reefs to sand dunes and monsoon forest. It encompasses nesting sites for four marine turtle species and habitat for 54 migratory bird species and 18 threatened species.

The stunning and relatively undisturbed environment of the Yolngu land is also a drawcard for visitors coming via the township Nhulunbuy who must apply for a permit through Dhimurru before visiting Aboriginal-owned areas.

While showing Guardian Australia around several key Dhimurru areas, Marika joked that he liked to give tourists a bit of a shake-up and check everyone for their permits, but there was a serious side to controlling visits.

“You’ll see it’s a very good thing for the benefit of my people and all the visitors to come here,” he said. “We are generous to bring people here, but they must do the right thing. What we require is that they must come through the right channel because the whole area is like our backyard.”

This year Dhimurru launched its seven-year management plan at the annual Garma festival. The main aims are to conserve the natural and cultural heritage values of the IPA and to sustainably share the region between Indigenous, commercial and recreational uses.

Dhimurru cares for one of 70 IPAs across Australia which cover 63m hectares of land and sea.

Both the Working On Country and IPA programs have generated high demand among Indigenous people for work as a ranger, high job retention and qualification attainment, and a beneficial economic effect on communities.

Thursday’s report by the Pew Charitable Trusts and Synergies Economic Consulting found “there is considerable evidence that ranger programs are contributing directly to COAG’s [the council of Australian governments] strategic priorities for closing the gap”.

The two programs cost about $67m in 2012-13 and represented 0.2% of the $30.3bn estimated to have been spent by governments on Indigenous services, the report said. It put the success of the program partly down to adequate funding by successive governments.

“Despite this relatively small share of funding, Working on Country and IPAs are delivering significant benefits. Working on Country has resulted in almost 800 full-time ranger jobs and many more casual, or part-time, positions,” it said.

Daniel Oades, IPA coordinator for the Bardi Jawi rangers in the Kimberley region, is in charge of 14 employees, and engages about 50 traditional owners each year in caring for their land and sea.

“On top of getting a better grip of what’s happening out on country … you’ve got the social side of things, including more jobs being created on country,” he said.

“And there’s pride – it’s great that when we do monitoring evaluations we can see fire management working, less late fires doing damage on country, building fences in community. We’re reinvigorating traditional knowledge about water places and letting elders get back more control of country through the ranger program.”

The Bardi Jawi rangers are based at One Arm Point on Western Australia’s Dampier Peninsula, and manage over 250km of coastline.

Caring for sea country is a complicated addition to the IPA management process, as there is no land tenure.

“Over the sea, we’ve got a collaboration system, an advisory group where all the stakeholders involved in any sort of sea country management have been invited by Dhimurru to one central point,” said Vanessa Drysdale, who facilitates the sea country plan.

Dhimurru rangers sometimes do aerial sweeps of the inaccessible shoreline for ghost nets which are swept in by the currents of the Gulf of Carpentaria. 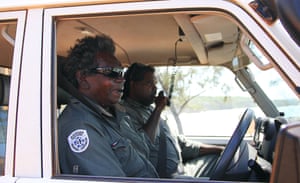 Dhimurru, which has 15 rangers on the ground, works with the CSIROand customs. When some rangers become qualified compliance officers, there are plans to work with the fisheries department too.

“We’re in a good position. Most of the IPAs and rangers are set up in these incredibly remote areas where it would be so costly for government to put in their infrastructure,” said Drysdale.

“Increasingly I think organisations are seeing that, understanding that our capacity is increasing and that we are here and ready to do it.”

“That’s about getting kids excited about being at school but also skilled up so when they hit the real world they’re off and running and ready to be rangers,” said Drysdale.

Studies by the Menzies School of Health Research have found evidence of a link between working on country and better mental and physical health outcomes in Indigenous communities.

Patrick O’Leary, conservation partnerships manager at Pew, said: “We think the report released today is a really compelling case for increasing funding for what are possible best value programs in remote Australia, in terms of delivering on environmental protection and against the key measures the government say are important for reducing social and economic disadvantages for Aboriginal people.

“Let’s not let this go. We’re on a winner now, and we need security through to 2030 at least. We need a high level target of 5,000 jobs nationally … if we’re going to tackle native animal decline, biodiversity and have a healthy landscape.”