The spark of life: how fire defines a desert country

Prior to white settlement, Indigenous Australians developed an inherent understanding of the relationship between fire and the country on which they lived. It was an understanding shaped by their own needs, and by the response of different plants and animals to their environment.

Over time, Indigenous use of fire became an important part of the landscape itself – a symbiotic process, where fire could be used by people to gather food, and by the country to rejuvenate itself.

Here are five ways in which Indigenous use of fire affects the landscape:

For generation upon generation, Indigenous people have used frequent fine-scale patch-burning in the cooler months, when burning can be more easily controlled. This creates a mosaic-like diversity of vegetation in various stages of maturity – from green-shoot regeneration to old growth.

Reducing fuel loads on surrounding land acts to protect and sustain patches of long-unburnt vegetation, because it acts as a ‘brake’ on wildfires that are sparked by lightning strikes. Old-growth trees, whose hollows support a range of birds, bats, bees and reptiles, can remain intact, as well as mature spinifex, which provides important shelter for a range of non-burrowing species.

For example, the desert mouse, which uses the tangled mass of mature spinifex for cover from predators, can live in close proximity to the bilby, a species that prefers to feed in more recently-burned, regenerating habitats. As well, the smaller the burned areas, the less these animals have to travel to find new cover or new food sources.

… and native vegetation not adapted to survive ‘hot’ fires …

By using cool season burning, and by reducing fuel loads, this type of fire management also protects nearby vegetation that has not adapted to high-intensity fires. This might include mulga shrublands, which border spinifex country, or the more vulnerable high-ground pockets of native pine, rock fig or spearbush. These species cannot survive a wildfire’s extreme heat and may lack a seed bank from which regeneration can occur.

Hot fires can also cause to soil erosion, potentially causing a permanent shift from one vegetation type to another.

… plus, it’s a vital cultural practice …

Burning is also a meaningful way of actively maintaining the connection between many Indigenous people and country. It allows for the passing of important cultural knowledge from one generation to the next. Ranger programs enable the bringing  together of many aspects of traditional knowledge with the latest science and technology, such as an understanding of rare plants and animals, the capture and interpretation of satellite imagery, and the use of controlled aerial incendiary burning.

… with an added bonus. 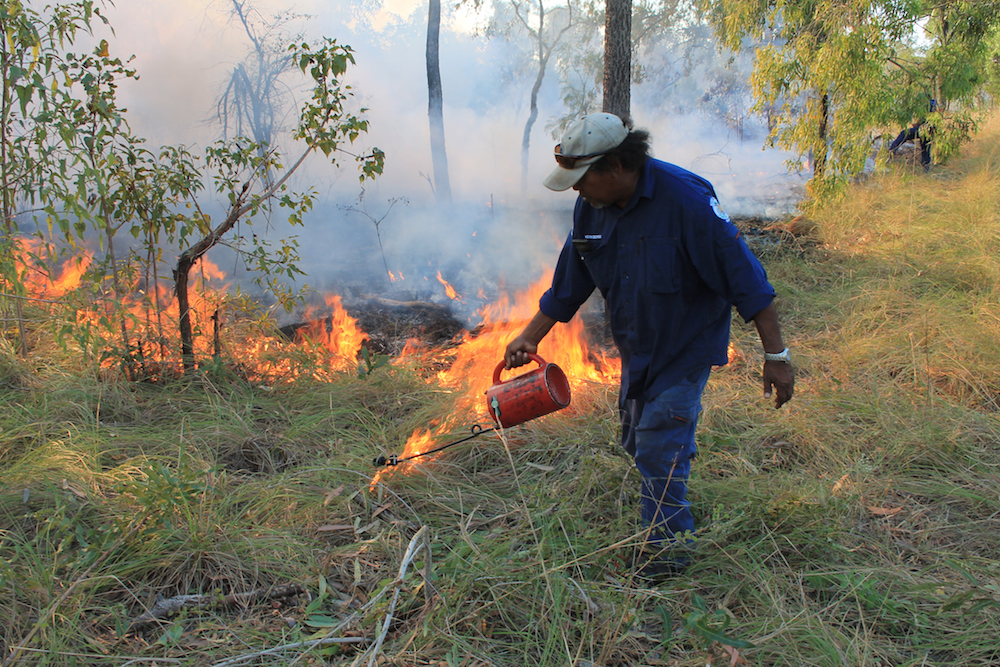 Quite simply, there are too many different landscapes, ecologies and geographical differences to make the publication of common practices possible. If you’re interested in finding out more about the traditional Indigenous use of fire, you might want to consider reading this.)