A new IPA from a lot of hard work

Ngadju people have had a lot to celebrate lately. In 2014 Ngadju country was successfully claimed under the native title act, with a large amount of that country determined as exclusive possession - the strongest form of native title possible. And over the weekend, Les Schultz and many Ngadju elders, family and friends celebrated another hard-earned win - the Ngadju Indigenous Protected Area declaration. The IPA covers the Great Western Woodlands, one of the most biodiverse and unique environments in the world and is home to the Ngadju people. This is Ngadju Country.

For thousands of years, the Ngadju have been utilising and managing their country, including harvesting and looking after precious water by making ‘water trees’ and shaping rock holes. Who better to look after country than the crew who’ve been looking after it for at least 50,000 years? 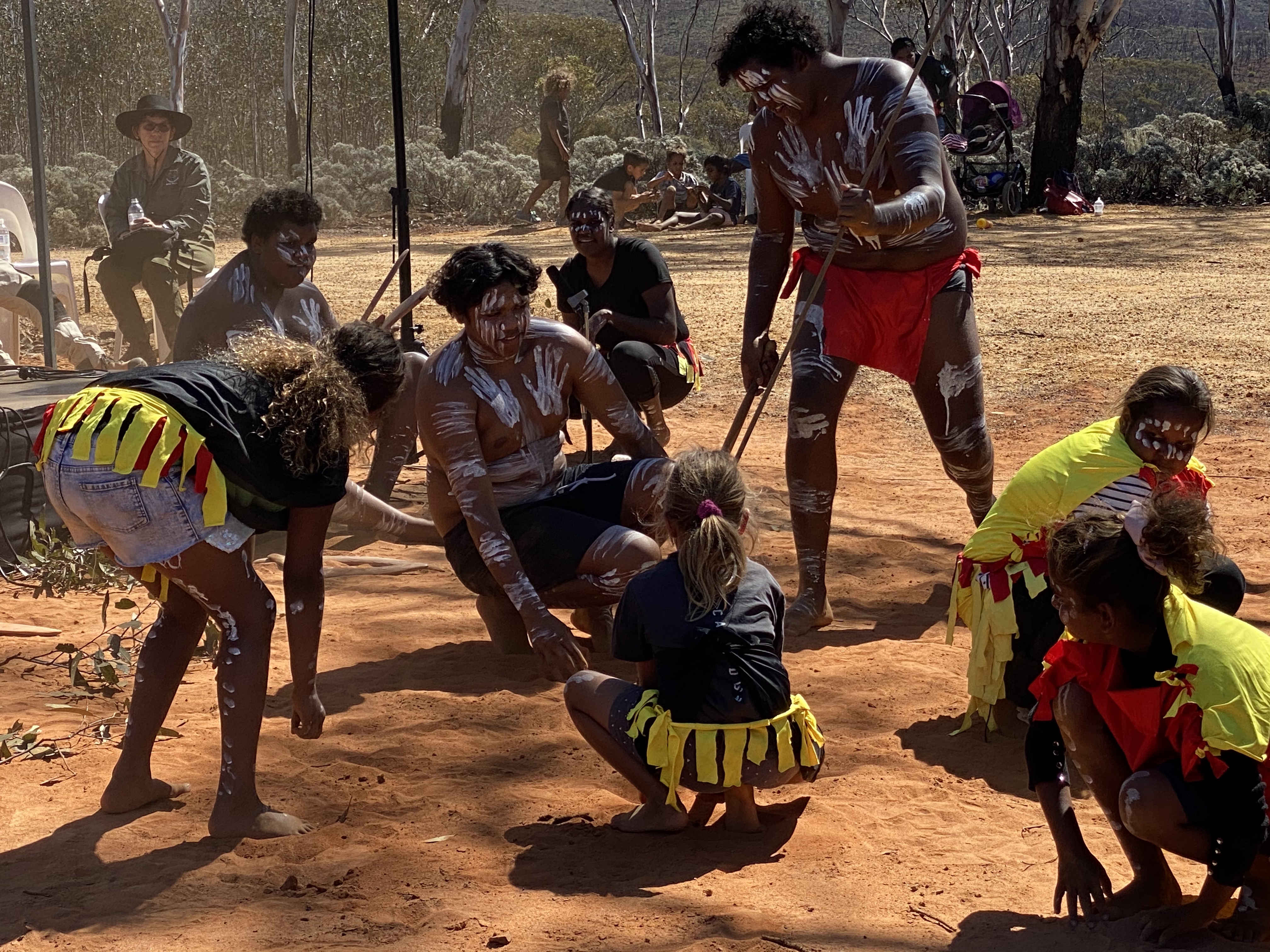 Last year, Country Needs People caught up with Les Schultz, one of the senior Ngadju custodians and a key figure in Ngadju conservation. Les’ hometown is Norseman in the heart of Ngadju country, around 700km east of Perth in Western Australia. 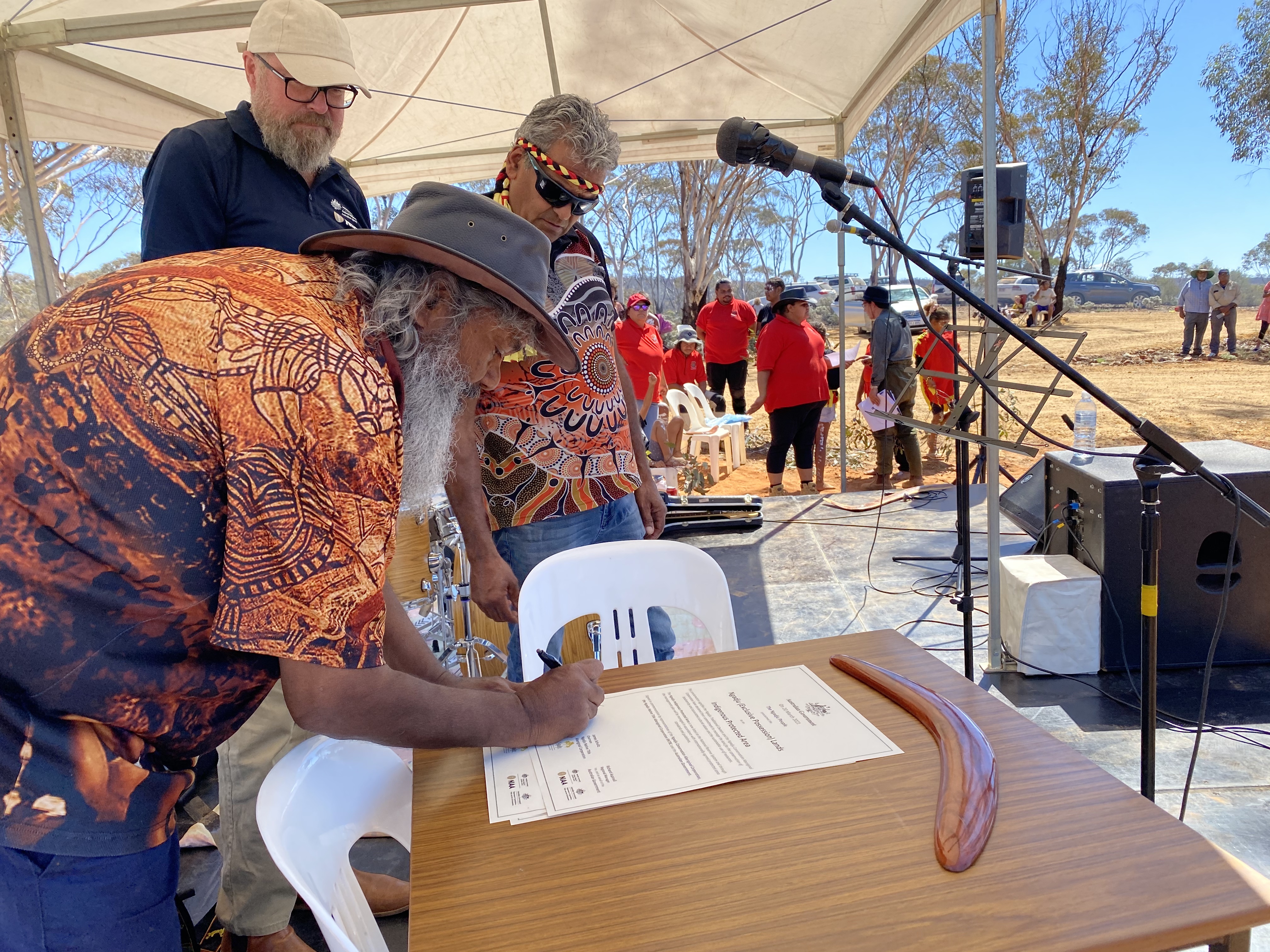 We were eager to chat with Les about the Ngadju Indigenous Protected Area, how it came about, and what hopes he holds for the future for Ngadju people and country.

Les  explained that he and other Ngadju people had been supported to attend a few international ranger forums some years back- at One Arm Point and later in Darwin. At this stage Ngadju were already on the road to getting their native title claim sorted, and were looking ahead, wondering what the next stage would look like. It had been in Darwin where Les had got to chatting with an American Indigenous ranger about looking after and protecting Country. After this conversation, Les started to  look toward an Indigenous Protected Area as another approach that would offer the Ngadju more opportunity to protect and look after their land for themselves while connecting it as a model to draw the support of Government and the Australian public.

Les went on to describe the long and strategic road the Ngadju people had taken to get where they are today. He stressed that without the collective effort of many Ngadju – young, old and including those who have now passed- would not have been possible.  He also spoke about the importance of Indigenous and non-Indigenous people working together as an important element in both the native title and IPA processes.

I guess that a lot of our success was based on those two [Indigenous and non-Indigenous] pressing forwards. So, if it was a whitefella problem, well then, the whitefella was able to work out the best way to deal with it. If it was a blackfella problem, then the blackfella knew how to work it out and deal with it. If you’re a blackfella you can give up in the bureaucracy. Even being a whitefella you can give up being in the blackfella bureaucracy too. So, you’ve got to get that balance happening. I guess that was our success, to have that balance. 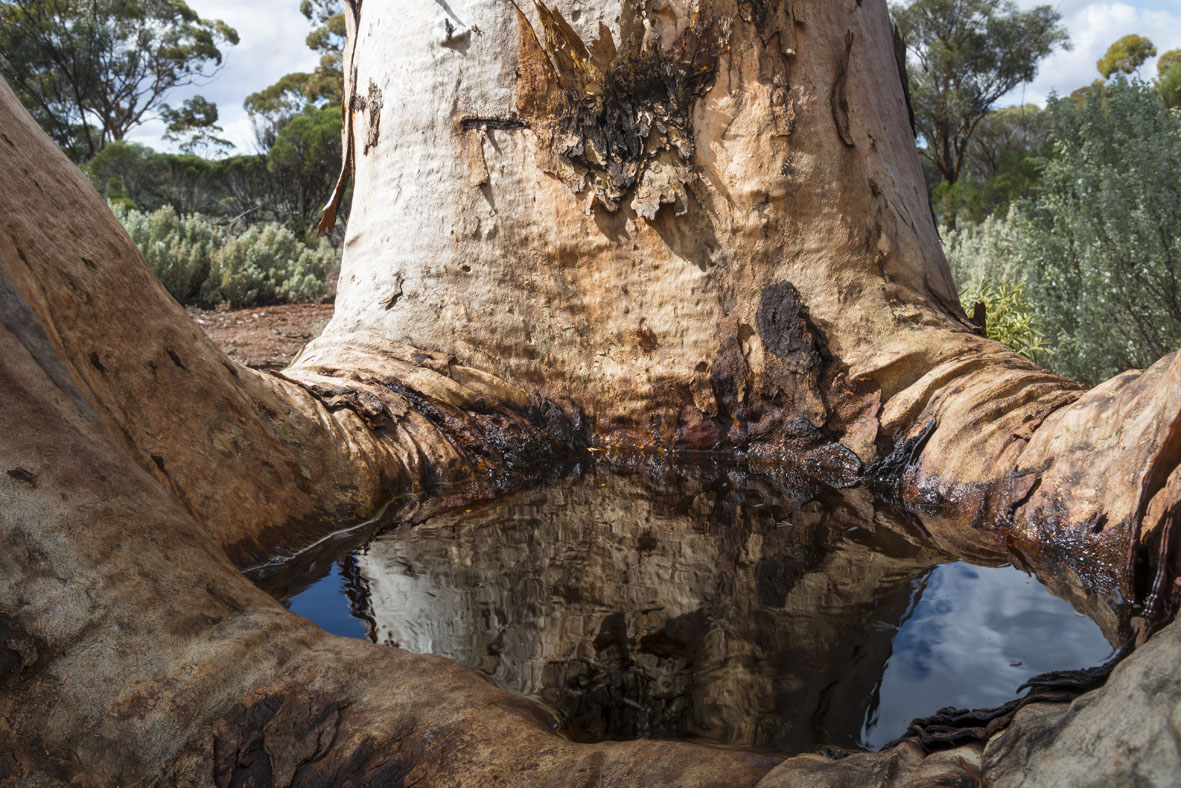 In doing this they have achieved recognition and support to manage and look after Country they and their ancestors have been tending to for generations. In Les’s view the Ngadju IPA holds so many opportunities for young people to learn about and contribute to the wellbeing of their culture and country.

Les said he is thankful for the support and the partnerships which helped Ngadju build the foundations they needed to get out on Country. Here, Ngadju people could make plans together for how they would look after their Country. These planning processes would eventually lead them to an IPA declaration and some funding for rangers.

It [the planning process] was active participation. So, people were out there doing stuff like cleaning rock holes, cleaning water trees. So, they were out there tidying up places of significance and they were a part of the initial planning - I guess [what would be] the conservation action plan for the future.

So, we pulled that plan together with people on country. And that really sent benefits in a big way which created jobs. We were able to lobby Canberra once the determination of native title came through. We slapped our plan in front of them and said ‘look this is what we want to do now that you’ve given us that land.

At first, we were operating under philanthropic support and privately supported programs. And that went on for a few years and that really gave us the foundations to move toward native title and land management. That [support] gave us a plan, and it gave us the Ngadju Conservation Aboriginal Corporation, which then basically began to create the structured plan that integrated traditional land management with ecological land management'.

We asked Les to describe some of the work that rangers will be doing on the Nagdju IPA.

He said that it is people who pose some of the biggest threats to the Western Woodlands, as it is people who bring in pressures from mining, rubbish and invasive species. The Ngadju rangers will work on addressing feral species like camels and cats, as well as invasive weeds, mosaic burning, and maintaining valuable water supplies so that Ngadju and and wildlife have water. Importantly while doing this work on Country, opportunities exist for cultural and traditional ecological knowledge to be passed on. This is a really vital element to the work of rangers, and the flow on effects of taking charge of managing living culture are huge. 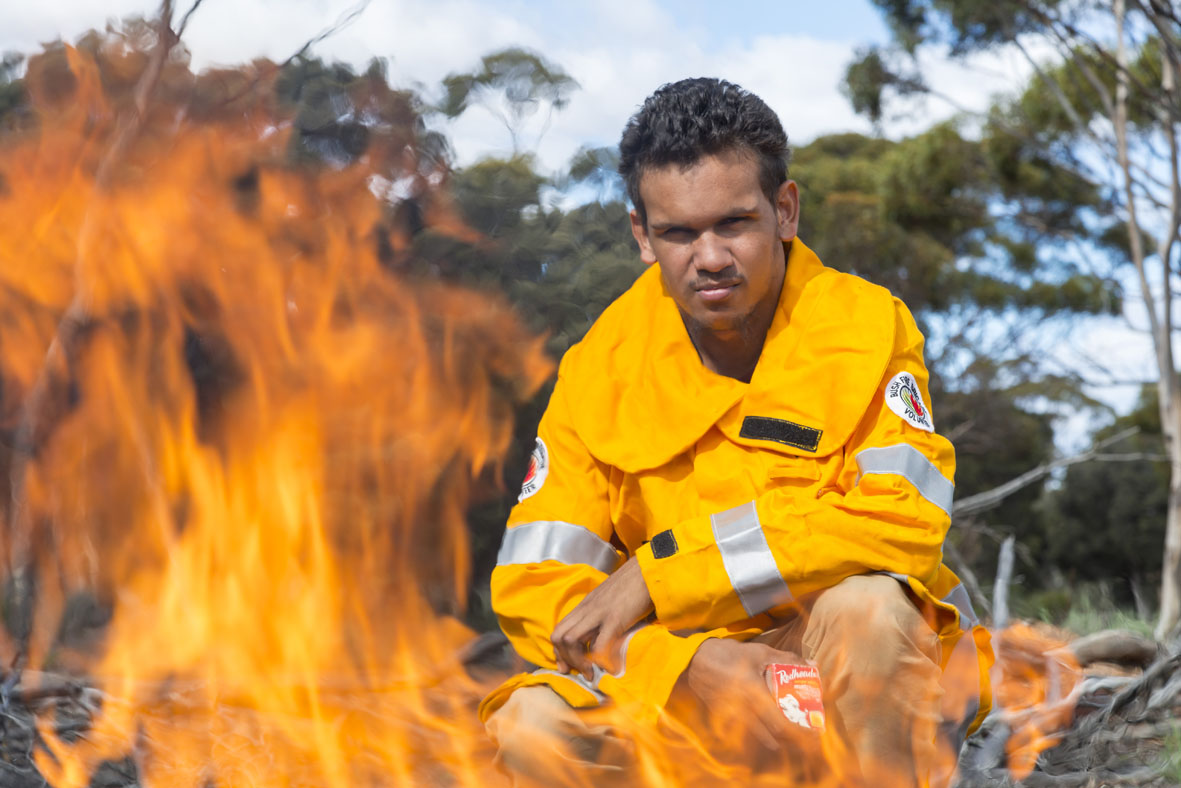 Finally, Country Needs People asked Les about what he hopes the future looks like for younger Ngadju and the IPA.

The IPA creates jobs. There’s funding there from the government. And those jobs will go to our younger generations that are able to land manage alongside older ones too.

It’s a really interesting time because we also scored the state ranger program funding along with the IPA. So, then that means more jobs for young people and that’s the way we want to see the programs. It’s not just administration, but it’s spent on wages. So, it’s returned to the people who are the boots on the ground on country.

We got one girl who came from high school on an excursion first with the rangers. Then she came voluntarily, when she left school, she became part time. She had a baby, and then she came back after having the baby and yeah now she’s back working full time”.

Les left us with a final message 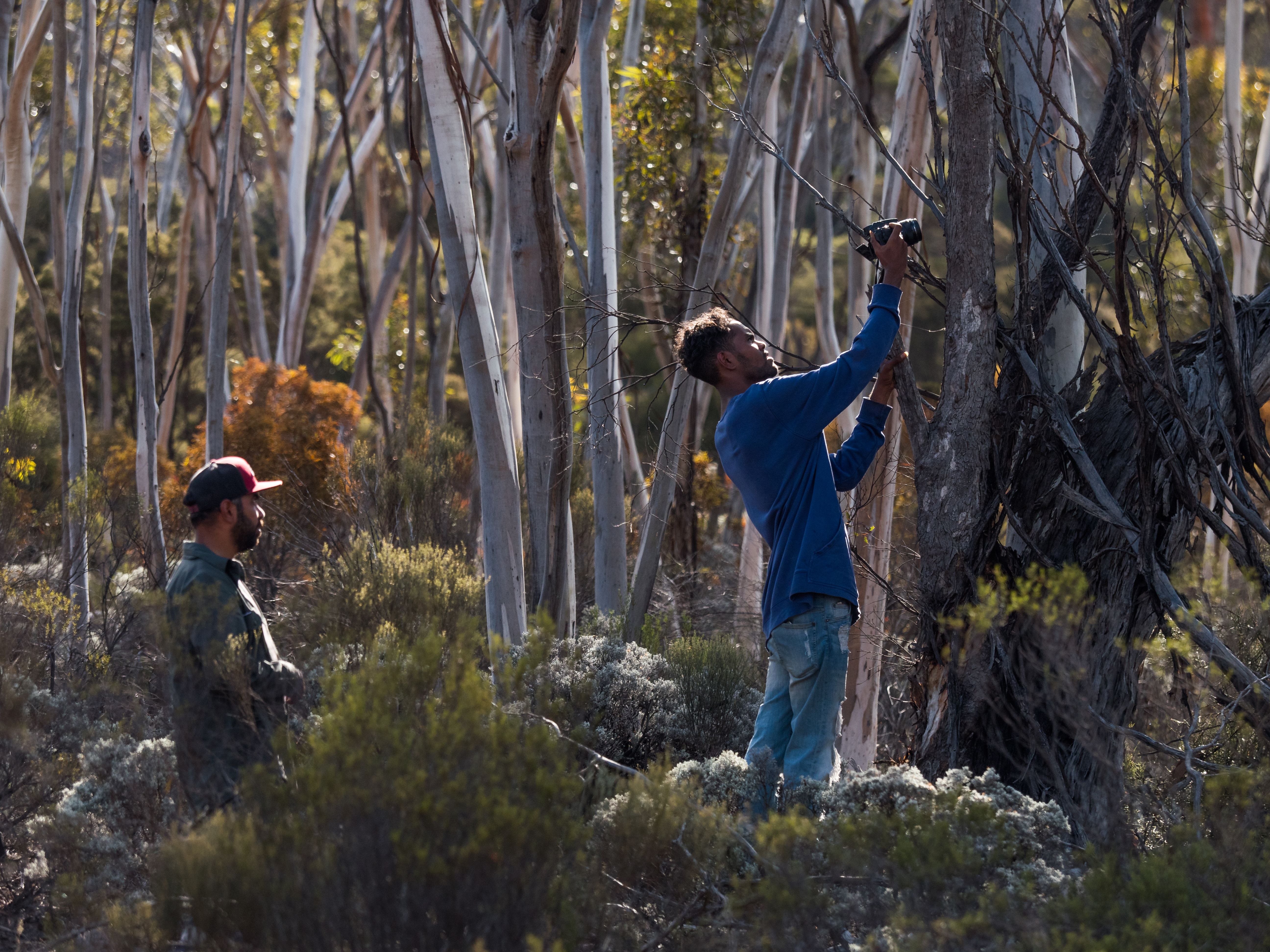