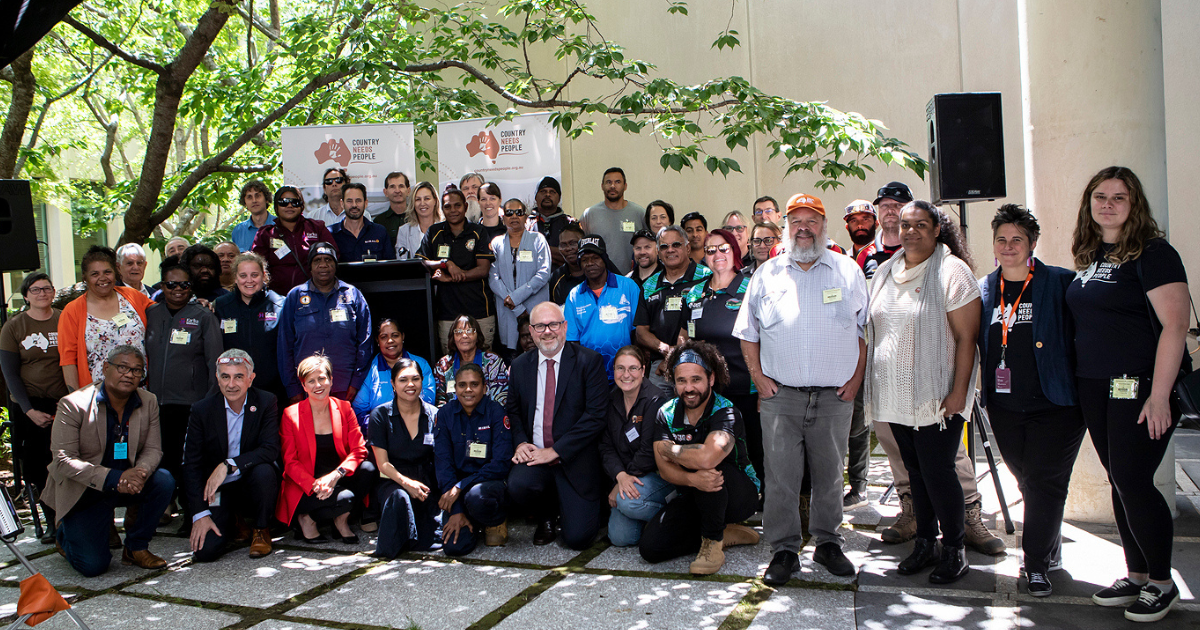 On 24th November 2022, 45 Indigenous Rangers, traditional owners and Indigenous Protected Area Managers from all across the country came together at Parliament House to share the successes but also the challenges of the Indigenous land and sea sector in an event organised by Country Needs People.

The Hon Tanya Plibersek, Minister for the Environment and Climate Change spoke, alongside Minister for Indigenous Australians the Hon Linda Burney and The Hon Marion Scrymgour at an event which garnered support from across the political divide with former Indigenous Affairs Minister Ken Wyatt present, Minister McAllister, Minister Bain, as well as Warren Etsch, Senator Kerrynne Liddle and other Coalition members plus Senators Jacqui Lambie, Tammy Tyrell, David Pocock, and more.

“It was fantastic to see the broad cross-party support at our event today with the Minister for Environment and Minister for Indigenous Affairs firmly backing the important work of Indigenous Rangers and Indigenous Protected Areas”, said Patrick O’Leary, CEO of Country Needs People.

“The government’s ongoing commitment is critical, their support needs to ensure that Ranger teams and IPAs are not set up to fail, have solid operational funding and can cope with inflation. Indigenous Rangers, traditional owners and IPA managers work in often tough, remote locations, in an increasingly challenging context with significant economic and social pressures, but continue to protect biodiversity, steward our cultural heritage and care for Country in a changing climate.

Gunditjmara Traditional Owner and Country Needs People Chair Denis Rose said “We need to be talking to each other. Government needs to understand what we are grappling with as land and sea managers on the ground, sit down with us and understand what we’re trying to achieve”.

“In our Gunditjmara Country, rangers and Indigenous Protected Areas have been key to how we got to where we are today on our journey, but the challenges aren’t over by any stretch. Years back, we used to see people from the federal Environment dept for example sitting down with us, in our offices, on-country, discussing the practicalities of what we need and lending practical informed support. That’s dropped away, we’d like to see that rebuilt back again, because you can’t have a relationship only through a funding contract or by remote control, and we need people to understand these practical matters.”

Country Needs People are an independent not-for-profit organisation with a growing network of 43 Aboriginal and Torres Strait organisations who work and advocate for the growth, security and quality of Indigenous sustainable land and sea management Australia wide. Country Needs People works to keep nature, people and culture strong, instigating the successful campaign for doubling jobs for Indigenous Rangers and growing funding for Indigenous Protected Areas since 2015, which received cross-party backing at the 2022 Federal Election, and has garnered the support of over 100,000 Indigenous and non-Indigenous Australians.