Knowledge, country and respect: how the bilby brought them together

The Ninu Festival brought together Indigenous rangers with scientists to share knowledge about saving the bilby. For Country Needs People campaigner, Sophia Walter, there was an even more profound process underway.

“That track’s from last night – I want to find something fresher.”

I’d been watching Nyangumarta ranger Aquinas Nardi’s cat tracking skills but he promptly jumped in one of the Landcruisers and set off to find a cat print from the morning.

Four of us – a ranger coordinator, two scientists and me – were left behind to look at the landscape. One of the scientists, Fiona Walsh, started telling us about ‘fairy circles’. We were standing in one of these regularly spaced bare circles of red dirt that are a feature of the Western Desert which only recently gained interest from the world when spotted on Google’s satellite view maps. Fiona said international researchers studied the fairy circles and argued (in peer reviewed journals and mainstream media, no less) they were the result of a complex interplay between rainfall and vegetation.

But Fiona supported another theory – that underground ‘pavement termite’ colonies were the cause. She said researchers were carrying out more studies to learn more.

As Fiona spoke, Gladys Bidu, an Manjilyjarra woman and Martu ranger who grew up in the Western Desert, walked past. Fiona asked Gladys over and asked what she saw on the ground we were standing on. Gladys took a second to look around then confidently declared, ‘that’s white ants underneath’. 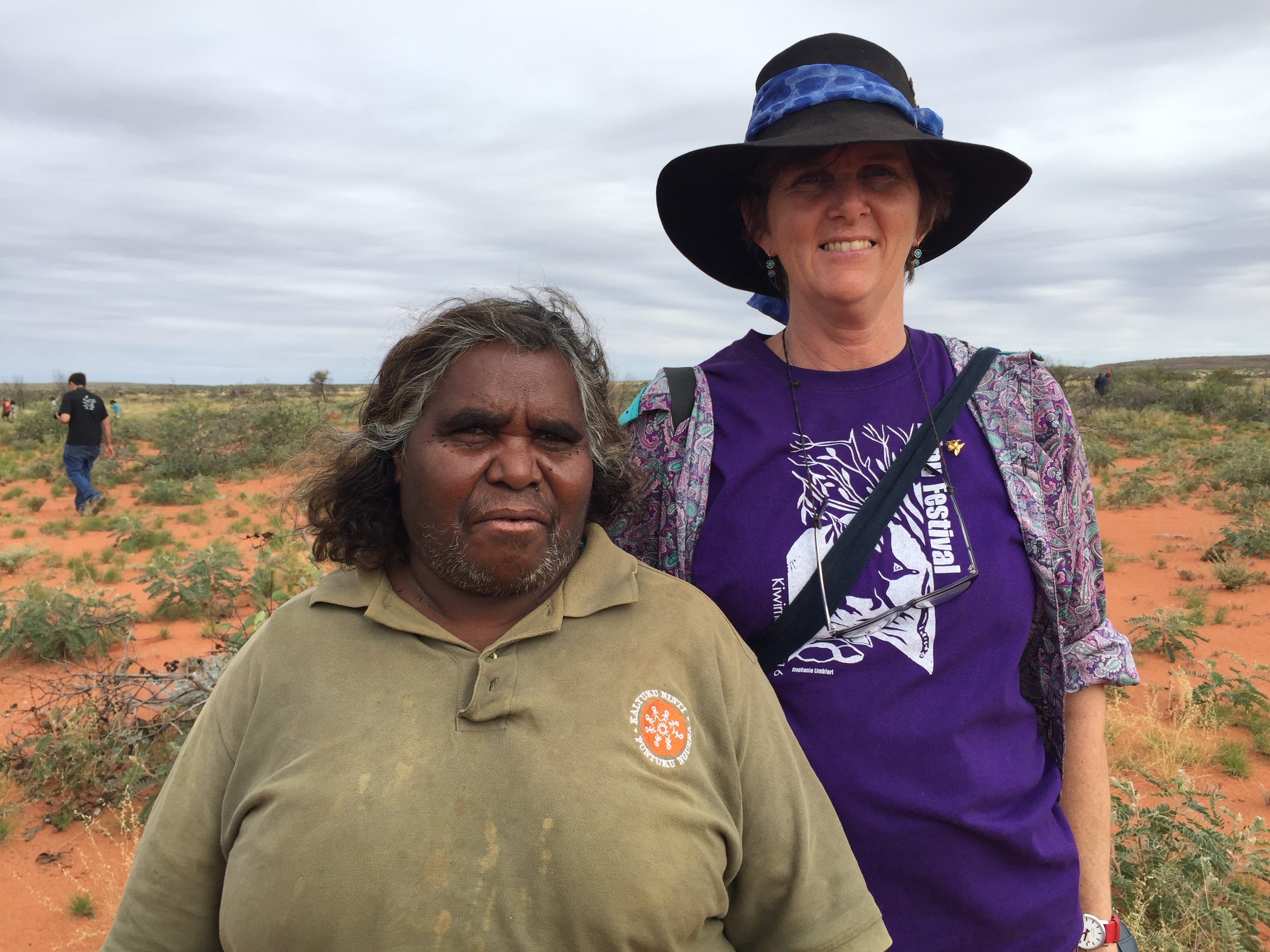 Gladys and Fiona perfectly demonstrated the power of traditional knowledge
and Western science working together.

I was floored. Google maps, international researchers and peer-reviewed papers. Did anyone stop to ask Gladys?

This was one of many powerful experiences at the Ninu [Pintupi for bilby] Festival. Rangers, scientists, civil society representatives and media had travelled a long way to be part of it.

“We are looking forward to showing all the rangers from other communities how we look after Ninu - setting up cameras at burrows, hunting cats, and making little fires so when it rains so lots of grass seeds grow up for Ninu.”

We learnt from Birriliburu Indigenous Protected Area ecologist, Vanessa Westcott, about roughly 80 per cent of remaining bilby habitat is within Aboriginal-held tenure, making traditional owners key to the protection of this iconic species.

“This little fella is bringing these experts – both traditional and white – together and that’s really powerful,” he said.

Another special guest was the famous cartoonist and animal lover, First Dog on the Moon. His blogs about the trip build a fantastic bridge between urban Australia and the work being done by Indigenous rangers in remote Australia.

"This Indigenous rangers program is amazing and I am quite cross about it. Why didn’t I know? I read the ABC Twitter account! I read the Saturday Paper! I live in Brunswick!" 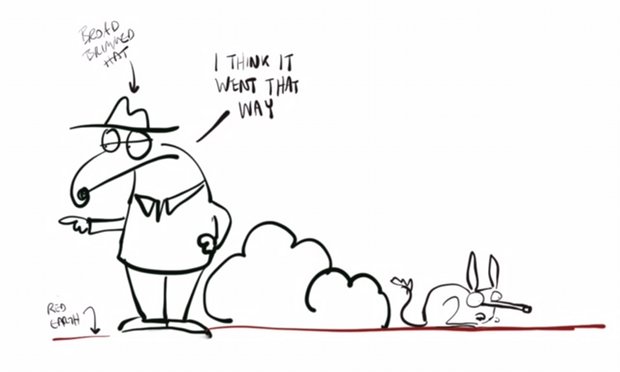 First Dog on the Moon demonstrating his bilby tracking skills. Credit: The Guardian

Pew Charitable Trusts spokesperson Patrick O’Leary said his organisation was in attendance as one of the 26 Indigenous and non-Indigenous organisations calling for increased funding for Indigenous rangers and Indigenous Protected Areas through the Country Needs People campaign.

He said the event was a testament to the importance of having Indigenous rangers actively managing land across Australia.

“This event shows us why increasing funding for Indigenous rangers and Indigenous Protected Areas has so many benefits – it means a healthier environment for everyone, including the bilby, at the same time as creating meaningful work for people living in remote Indigenous communities.

“Through the Indigenous ranger programs and Indigenous Protected Areas, we are building terrific capacity out on the ground where bilbies still occur.

“We need to listen to the voices from the desert who have the best knowledge of where the bilbies are, where they’ve disappeared from, what fire regimes and food plants they respond to, and why they are worth protecting,” she said.

"Culturally it's very important to Aboriginal people," he said.

"We still have song lines and jukurrpa (dreaming) about the bilby.

"Also they are a good environmental indicator. When bilbies are doing well so is the environment."

The Festival was organised by the Indigenous Desert Alliance, a network of Indigenous Land Management groups from Western Australia, Northern Territory and South Australia. 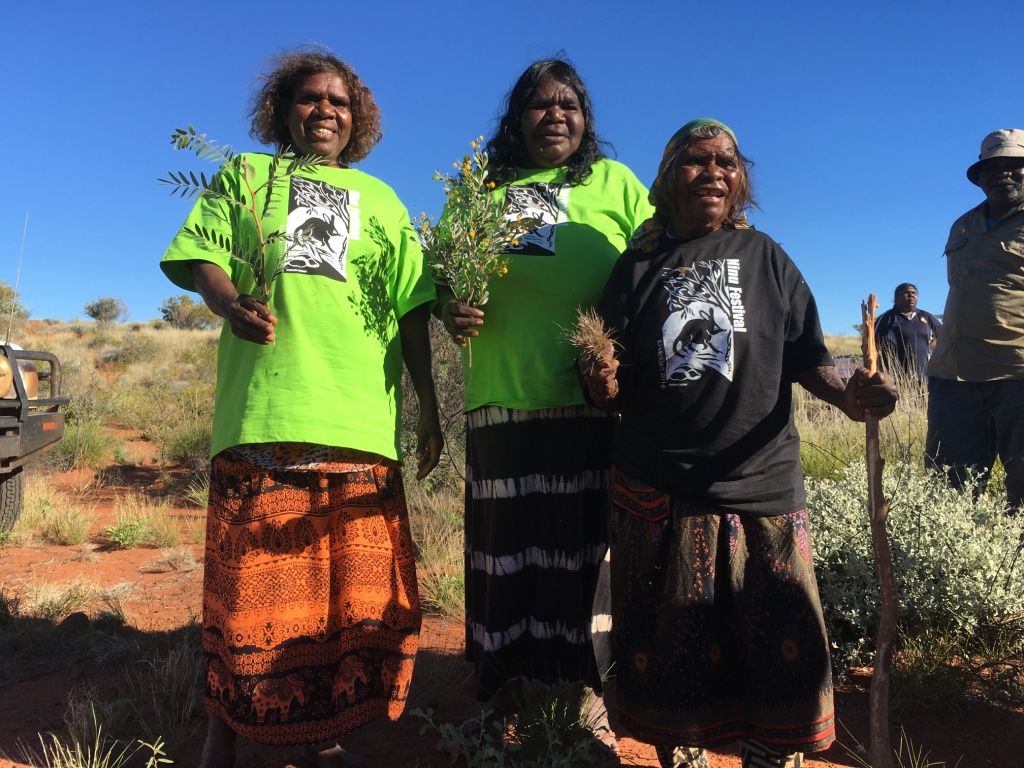