Feral pigs are one of the most destructive pest animals in Australia; among other damage, they kill endangered marine turtles by destroying their nests and eating their eggs and newborn. Endangered olive ridley turtles are especially vulnerable to predation by feral pigs at nest sites on Cape York Peninsula. The Pormpuraaw Land and Sea Rangers are monitoring pig predation on turtle nests, culling feral pigs and protecting nests using innovative, predator-proof cages. The rangers’ actions more than doubled the proportion of turtle nests that escaped pigs and other predators from 2014 to 2016. The incredible success of the Pormpuraaw Land and Sea Rangers demonstrates the need for ongoing and expanded support for Indigenous ranger groups to protect turtle hatchlings from deadly feral pigs and other predators.

The Pormpuraaw Land and Sea Rangers protected turtle hatchlings by: 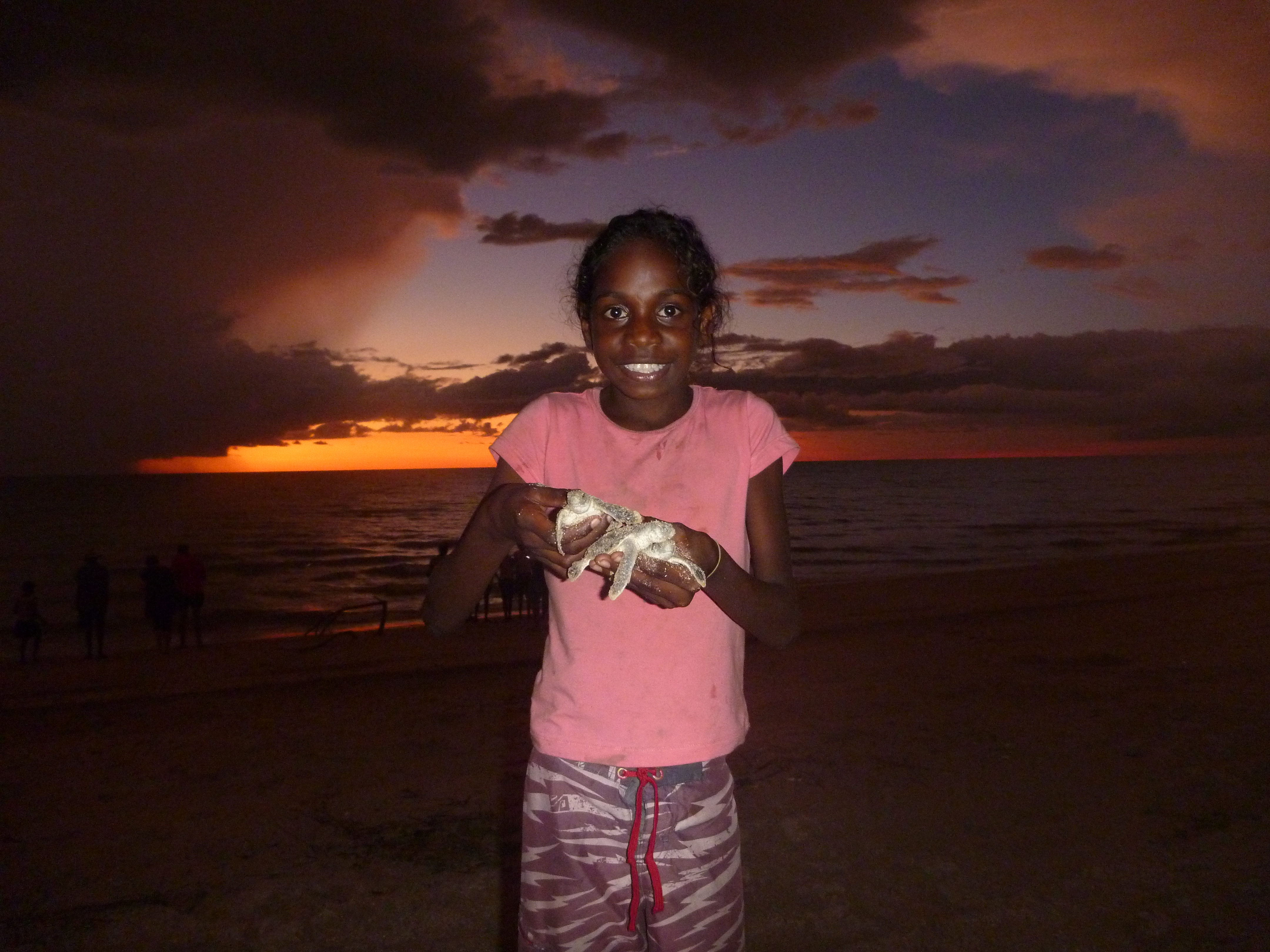 Pormpuraaw Rangers have a Junior Ranger program so young people like Leannedra Holroyd can learn more about caring for country. Photo: Pormpuraaw Land and Sea Management.

Feral pigs are one of the most damaging pest animals in Australia. The cost to the economy of pig damage and control exceeds $100 million every year (Australian Government, 2015); this estimate does not include damage to the environment.

Feral pigs damage the natural environment in many ways. They eat native plants and animals, including endangered frogs, fish, birds, turtles and mammals. Pigs degrade natural ecosystems and erode soils as they dig and forage. They pollute wetlands and streams, and spread diseases and invasive weeds (Australian Government 2015).

Turtles bury their eggs along sandy beaches, and feral pigs dig up the nests and eat the eggs and newborn turtles.

Feral pigs pose a severe threat to marine turtles. In some areas, pigs destroy up to 90% of turtle nests (Australian Government, 2017), contributing to a long-term decline in endangered turtles.

The olive ridley turtle (Lepidochelys olivacea) in the smallest of the six species of marine turtle in Australia. It is listed as an endangered species under the national EPBC Act (Australian Government, 2017).

Olive ridley turtles feed in shallow waters off the northern Australian coast (and elsewhere in the Pacific and Indian Oceans). Female turtles lay about 100 round eggs in shallow nests on sandy beaches. Two months later, the young turtles emerge, crawl to the surface and dash to the ocean (Limpus 2008).

“The control of feral animals… is essential at nesting sites along Queensland's coast to protect eggs from predation.” - Queensland Government (2013): 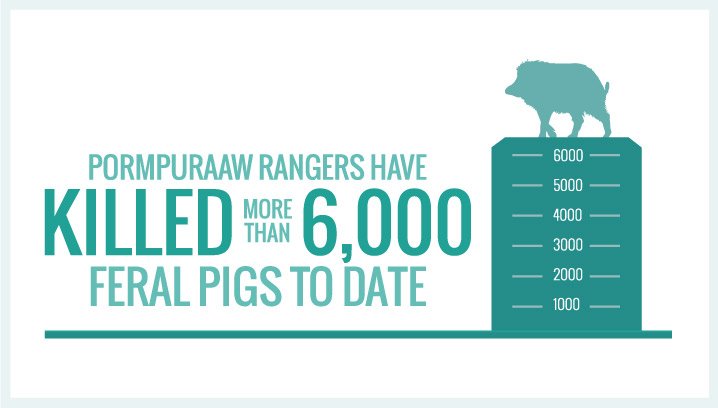 The Pormpuraaw Land and Sea Rangers live and work on the west coast of Cape York Peninsula. The rangers began monitoring olive ridley turtle nests along 85 kilometres of remote coastline in 2009. Their monitoring results from 2009 to 2013 – before intensive pig culling began – showed that feral pigs destroyed more than 90% of turtle nests every year.

To protect the turtles, the rangers began a major culling program and invented a special cage to protect turtle nests. The rangers culled feral pigs from a helicopter 4-5 times a year from 2014 to 2016, with additional ground shooting.

The portable cages Pormpuraaw Rangers designed and constructed prevent pigs and other predators from digging up turtle nests at the same time as allowing young turtles to escape through an open wire mesh. The cages led to 100 per cent nest success, and no predator damage, when tested at 200 nests in 2015-2016.

Ongoing monitoring from 2014 to 2016 revealed that the rangers’ actions more than doubled the proportion of turtle nests that escaped pigs and other predators. At one beach, 91% of nests that were monitored in 2016 hatched successfully compared to just 39% in 2014 – a spectacular improvement.

In addition to these actions, the rangers also remove discarded fishing nests (ghost nets) from beaches and nearby waters to prevent adult and hatchling turtles from becoming entangled and dying.

What is the future for olive ridley turtles?

Hard work by the Pormpuraaw Land and Sea Rangers has substantially improved nesting success by endangered olive ridley turtles on Cape York Peninsula. Their success is due to an integrated strategy of intensive culling of predatory pigs plus targeted protection of turtle nests. Systematic monitoring provides unambiguous evidence of successful outcomes.

The skills developed by the rangers, and lessons learnt, provide opportunities to further improve the fate of endangered turtles. However, as in the other profiles in this booklet, future successes depend entirely on ongoing support for the Pormpuraaw Land and Sea Rangers and neighbouring Aboriginal land and sea management groups. Unless their great work continues, baby olive ridley turtles have no way to escape from predatory feral pigs. Australia’s success in turning the tide on reducing feral animal impacts on threatened species depends on extending and securing this work over wider areas.