Thamarrurr Rangers have been working to clean and protect their vast coastline through a number of creative actions. 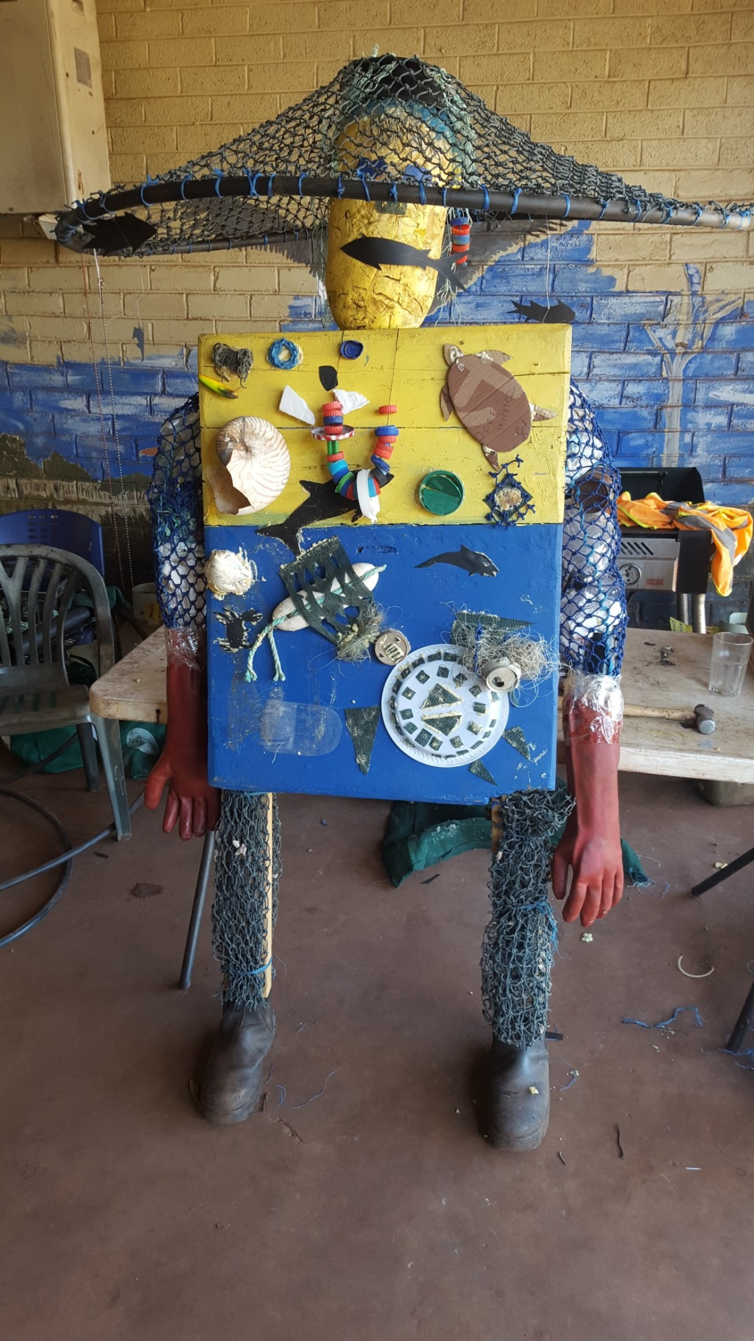 Rubbish is a relatively new problem on remote Indigenous communities. Waste products from food, clothing, tools and other items have traditionally come from the land and been recycled back into the land e.g. seeds from fruits, animal bones, timber offcuts. In contemporary communities there is a huge amount of packaging and waste products that cannot be recycled back into the land e.g. plastics, metals. This creates a new problem of managing this waste in a remote area where “rubbish” is unfamiliar and its impacts on the environment have not been well considered.

Most, if not all, waste products in remote communities end up in landfill or become “rubbish”, lying around the community, and being carried by wind and rain to the surrounding land and sea country. This rubbish can directly affect the health of people and wildlife, contributing to an unhygienic environment and harming / killing birds, turtle, sea life, etc. by eating the rubbish or getting tangled up in it. Waste products can also leach chemicals into our environment, indirectly affecting wildlife and food sources. Additionally, waste products from surrounding regions and ships travel on ocean currents e.g. plastic packaging, large fishing nets, and end up on relatively pristine beaches in remote communities.

Recycling waste products is also a significant challenge on remote communities due to distance, difficulty of access, excessive costs, lack of technical support and/or facilities, and the issue of community awareness.  This means that recyclable waste is put into landfill, potential employment and income opportunities are missed and local community services continue to struggle to manage the waste problem.

Thamarrurr Rangers have been working to clean and protect their vast coastline for many years. This includes regular patrols by boat, car and foot, and collection of rubbish from beaches, mangroves, inlets and islands in the Thamarrurr Region. The Rangers document the rubbish collected through the Australian Marine Debris Initiative (AMDI) database, coordinated by Tangaroa Blue, and are also involved in the Ghost Nets Australia program.

In 2015, Thamarrurr Rangers invited Tangaroa Blue to visit and support Rangers and the Community to improve our marine debris work and look at other strategies for managing waste. In May 2015 Heidi Taylor from Tangaroa Blue visited Wadeye and supported the Rangers to improve our marine debris work, including further training in the AMDI database. In addition, Heidi supported the Rangers to run a Community meeting about waste reduction, and develop a Source Reduction Plan (SRP) (Appendix 1).  The Thamarrurr SRP notes the desire for a coordinated approach to find solutions for improved waste management and a cleaner Community and Country. Two main strategies were identified to start with: 1. A rubbish art competition to raise awareness about the impacts of rubbish on Country; and 2. More bins on Country, particularly at the barge landing and popular picnic areas. Other issues were also discussed, including raising Community awareness through the local BRACS television station and opportunities for recycling.

Over the past year, Thamarrurr Rangers and the Community have been working on the SRP and other actions to help raise Community awareness and reduce waste in the Region. These actions are:

The Thamarrurr Rangers are eager to further develop the recycling project in 2016 through engaging directly with local households, families and kids. The idea is that people will be able to bring down their empty cans, plastic bottles and tetra packs (anything with the 10c refund marking) to the Ranger Base each Friday afternoon 1-4pm, and the Rangers will count, sort and pay people directly. To achieve this we will require several elements including information to be spread throughout the community for education and awareness raising, a dedicated ranger for counting and payments, and greater funding to support additional work loads and costs for the project. The Rangers are also considering other forms of recycling including car batteries, other metals, paper and cardboard. There are many possibilities…