Wunambal Gaambera country in the North Kimberley is again proving to be a refuge for small mammal populations, declining elsewhere across the top end.

A recent monitoring survey at Ngauwudu (Mitchell Plateau) found evidence of thriving mammal populations, while nearby Borda Island has been identified as having one of the Kimberley’s last active nabarlek (rock wallaby) populations.

The team observed and photographed a rare brush-tailed phascogale, and later recorded further members of the population via camera traps placed in nearby trees. 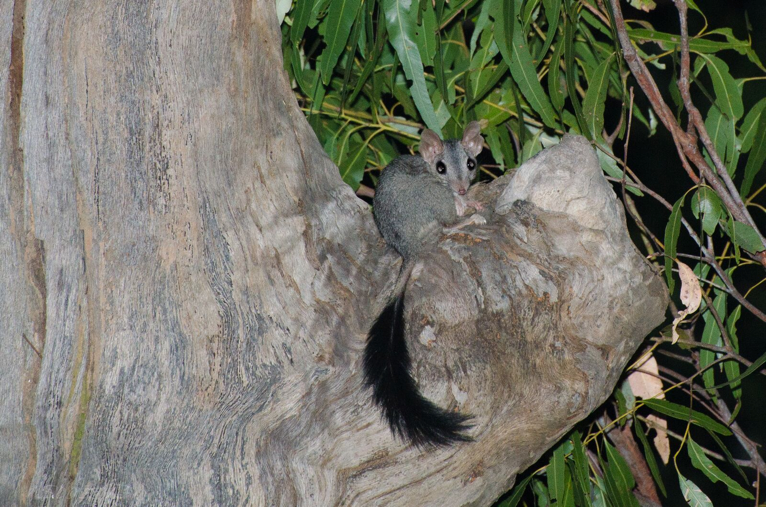 Significant numbers of threatened species, including northern quoll, golden bandicoot, and golden-backed tree-rat and other mammals such as the scaly-tailed possum and northern brown bandicoot were also recorded at the north Kimberley locations.

Ngauwudu is one of WA’s most scenic and biologically important locations. Its waterfalls, gorges, fan palm forests and fringing wulo (rainforests) are home to up to 50 mammal species and hundreds of bird, reptile and amphibian species.

During the work a helicopter visit was also made to Borda Island across Admiralty Gulf, to investigate a suspected population of nabarlek. Once thought to be widespread, there have been few confirmed nabarlek records in recent years. The team recorded multiple tracks and collected scats samples. Scat DNA analysis by the Australian Museum recorded a positive result, confirming Borda Island has one of the few known nabarlek populations in the North Kimberley.

“Monitoring focused on small to medium-sized mammals that are declining across northern Australia in response to threats such as fire, feral animals and disease”,Mr Vigilante said.

Camera traps were proving an effective addition, able to detect small mammals and other species such as feral cats.

“This year we introduced intensive camera trapping as a monitoring tool, as well as using traditional live trapping methods which have shown the plateau to be a biodiversity hotspot since the earliest surveys.”

“We were particularly excited to record the brush-tailed phascogales - the first sighting of this species in recent years - which gives us hope that this elusive animal may be more widespread than we previously thought.”

Cane toads have yet to reach Ngauwudu, however they are expected to impact heavily there within a few years, particularly on northern quoll populations.

The monitoring work supports the Wunambal Gaambera Healthy Country Plan by establishing a baseline to detect future change and its driving factors.

The work was supported by the Department of Parks & Wildlife, Bush Heritage Australia, the Kimberley Land Council, the World Wildlife Fund and Lotteries West.