Four very different corners of Queensland with one simple message

A Country Needs People delegation of representatives from Indigenous ranger groups descended on Queensland Parliament this week to call to grow funding for the Queensland Indigenous Land and Sea Ranger program.

Representatives from the Bunya Rangers, Lama Lama Rangers, Normanby Rangers and Ewamian Rangers talked with politicians of all stripes about the success of ranger work and the reasons why growing funding would also grow the benefits to the environment and communities. The rangers came from four very different contexts – from regional to remote, young to mature programs, land ownership to land partnerships – but all emphasised the success of their ranger jobs and the need to grow the program.

Miri Anderson and Paul Dawson from the Bunya Rangers talked about how their land management work brought together traditional owner groups with a wide range of stakeholders, including the Department of Fire and Emergency Services, the Parks and Wildlife Service, private landholders and others. Partnerships with landholders across the region had seen powerful outcomes for protecting more country and engaging more community members in meaningful work. 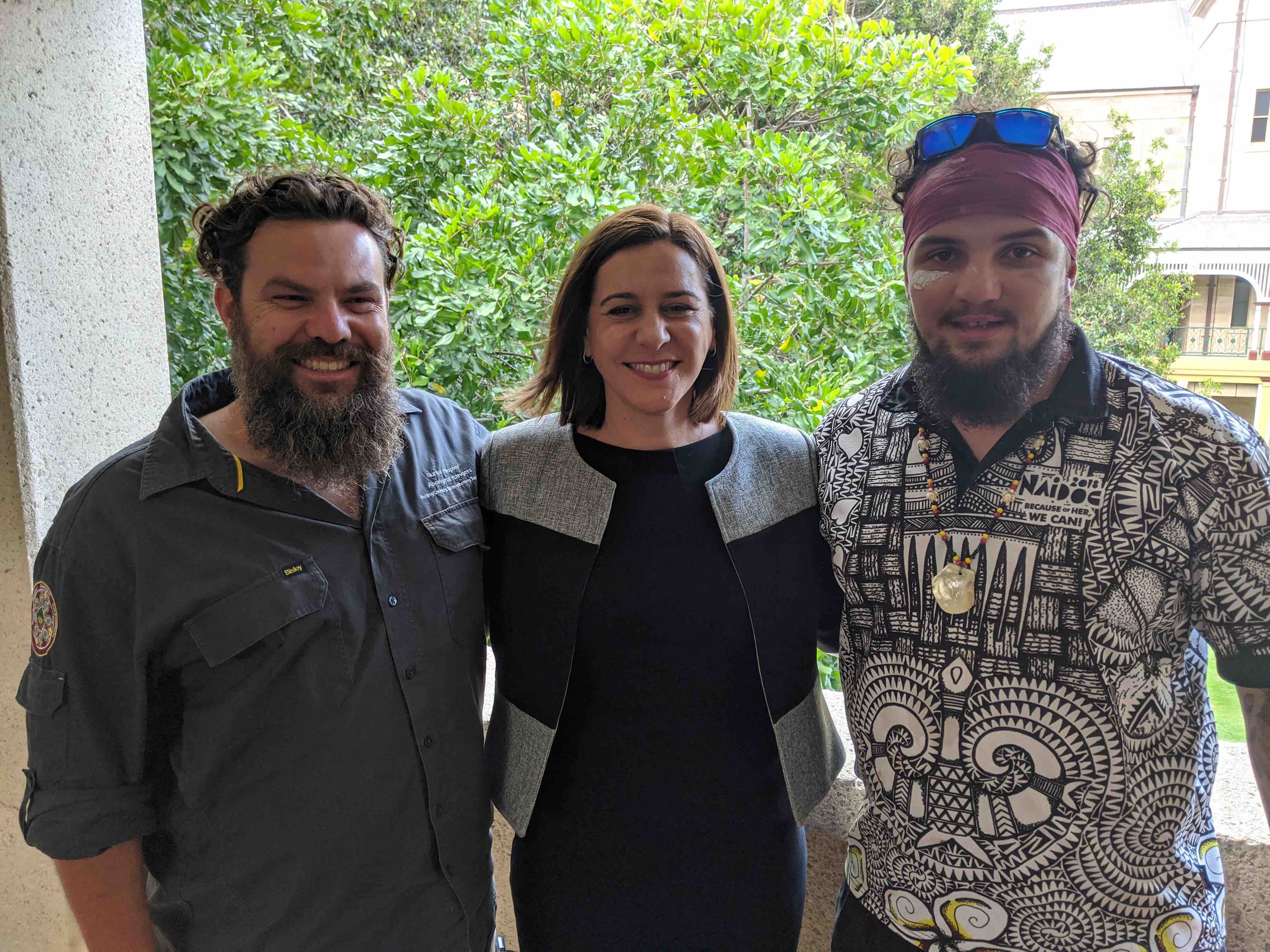 “We have one young trainee – he puts us all to shame. He’s so excited about working as a ranger that he turns up early with his shirt all perfectly ironed. You can see that he sees this as a career,” Paul Dawson, Bunya Rangers Aboriginal Corporation general manager, with Miri Anderson, ranger, and Leader of the Opposition Deb Frecklington.

Miri and Paul talked about their positive engagement with the Department of Environment and Science’s Indigenous Land and Sea Ranger unit. The Queensland state funded ranger program is widely considered to be the best supported in Australia because it emphasises relationships between departmental staff and ranger groups, alongside supporting training, funding for operational needs, , vehicles and administrative personnell, and it supports pathways for Aboriginal organisations to develop their individual and organisational capacity to undertake land management work. 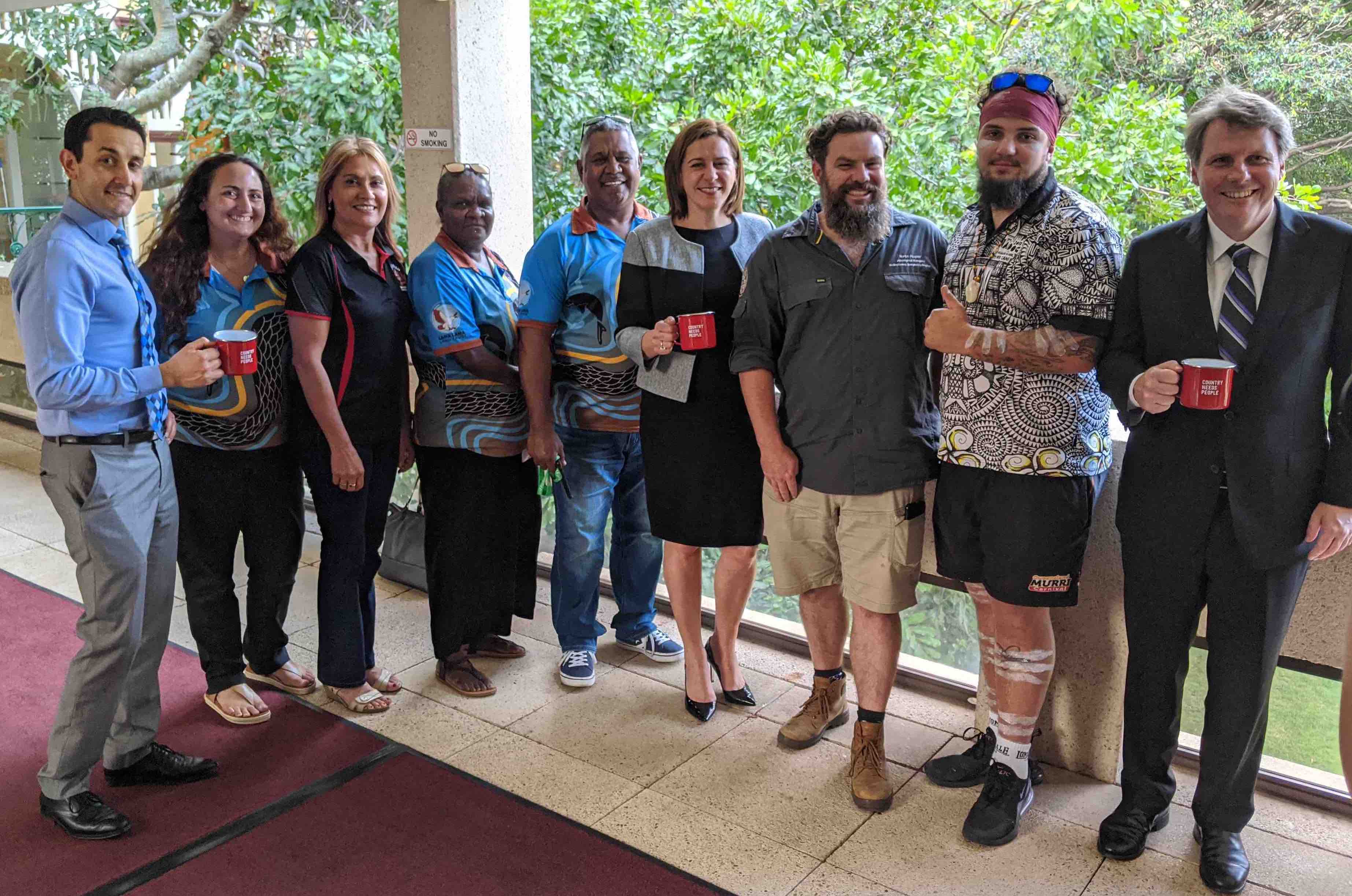 “I believe ranger jobs are important for my people, especially on the Western side of Brisbane, , but this is about reconnecting with our roots, our family and our culture. Just being in this role, I’ve connected with family who I wouldn’t have if I wasn’t in this role… The thing that we have today as Aboriginal people, is we have that permission. We can practice our culture and we won’t be taken by police or persecuted or put down in more subtle ways for it. Our old people fought so hard for us, and that’s why we have what we have today. We have our ranger groups across Australia, and that’s one of the best things we can do for our culture because we have our country and that gives us our culture,” Bunya ranger Miri Anderson pictured here with the Country Needs People delegation meeting LNP Leader Deb Frecklington, Shadow Environment Minister David Crisafulli (left) and Shadow Aboriginal and Torres Strait Islander Partnerships Minister Dr Christian Rowan (right).

Normanby Ranger Vince Harrigan made the long trek down from Cape York to meet with Environment Minister Leeanne Enoch. Vince is the only ranger working on Normanby Station, an area of more than 30 000 hectares where, like much of the Outback, late season wildfires, invasive weeds and feral animals threaten environmental health. Having more Indigenous ranger jobs would mean being able to scale up work tackling these threats. 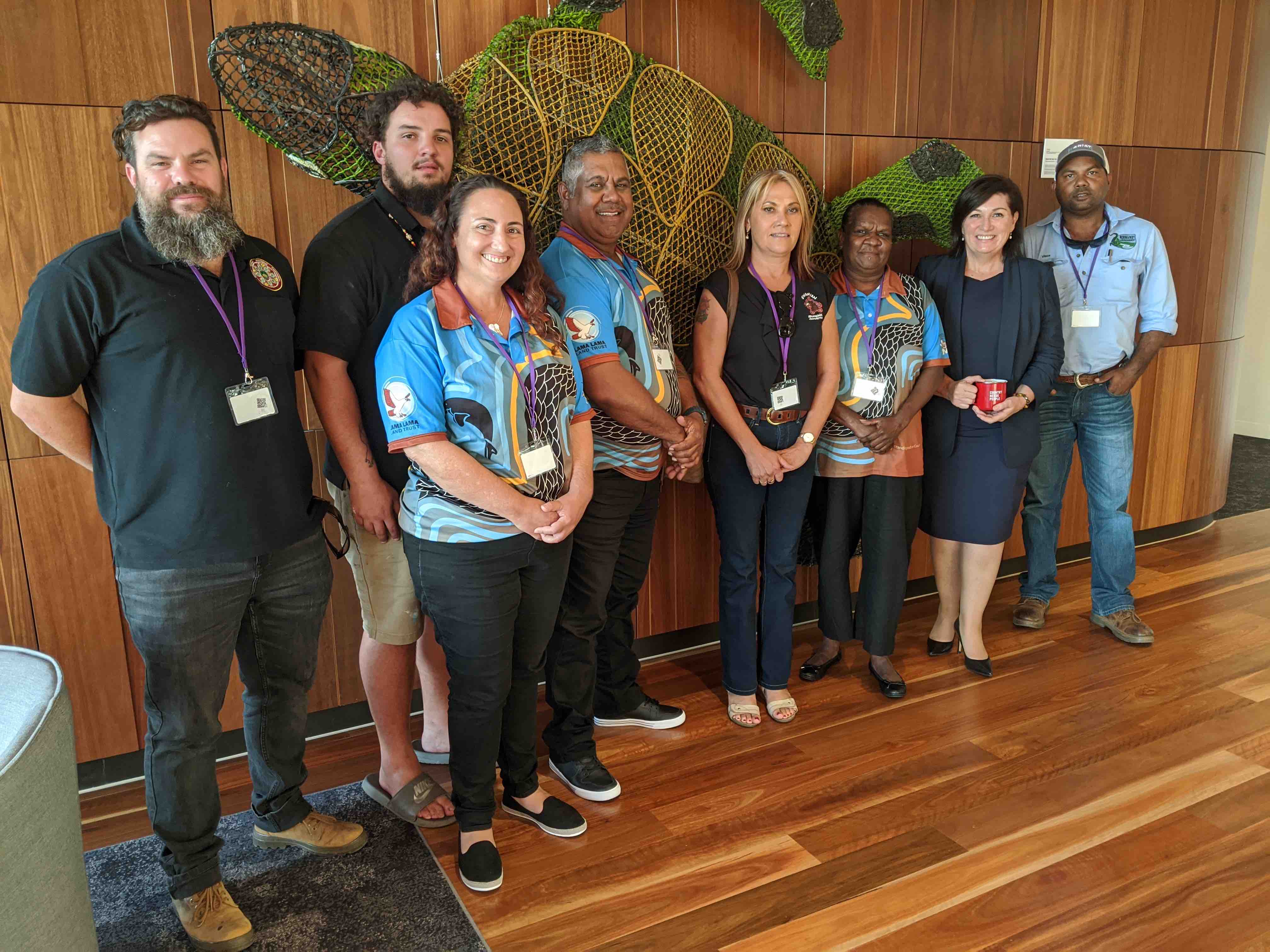 “We are the eyes and ears on country. That’s what rangers do,” Vince Harrigan, Normanby Ranger (right), along with others in the Country Needs People delegation meeting Environment Minister Leeanne Enoch. The Minister, who is a Quandamooka woman, pointed to “culture’s power to heal” as an underpinning feature of the Indigenous ranger program.

Sharon Prior, the chief executive officer of Ewamian Aboriginal Corporation, brought another perspective. Ewamian people were forced off country by colonisation but a recent purchase of property on Ewamian country by the Indigenous Land Corporation has given Ewamian people the opportunity to return to and reconnect with their country. Rangers travel 350 kilometres to get to work, where they stay for two weeks at a time. Land management work has provided a foundation for Ewamian people to come together and pursue more opportunities, for example a tourism venture they are currently developing. 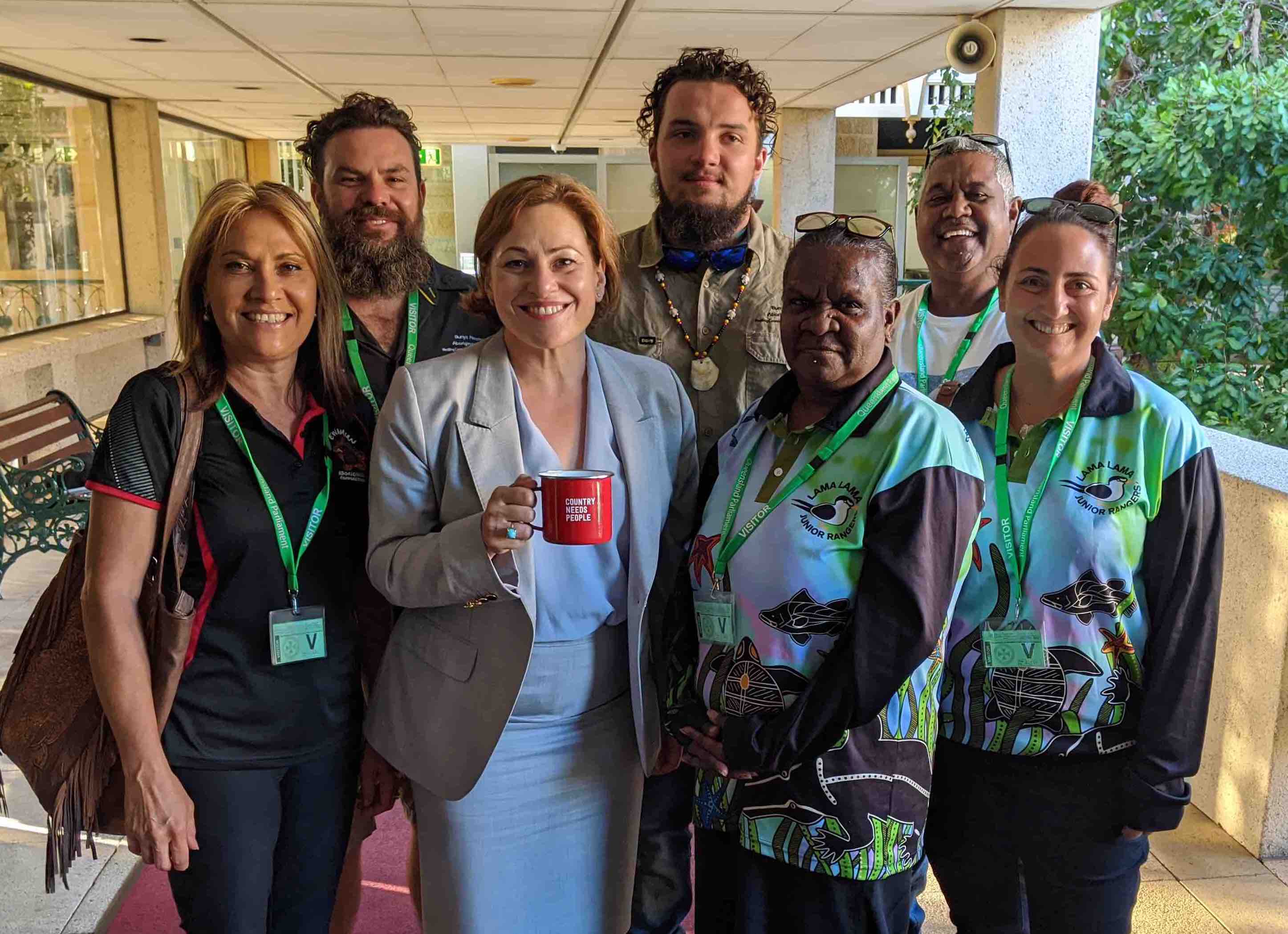 “It’s important to remember, this isn’t just about jobs. This is about the environment. It’s about country and culture,” Ewamian Aboriginal Corporation chief executive officer Sharon Prior, joined here by Deputy Premier, Treasurer and Aboriginal and Torres Strait Islander Partnerships Minister Jackie Trad, along with members of the Country Needs People delegation.

The Lama Lama Rangers representatives brought another perspective again. Each year, Lama Lama Rangers employ around 60 people in a mix of full time, part time and casual positions. In their community of 300 people, that makes a significant impact. The Lama Lama team demonstrated how successful a mature Indigenous ranger program can be – for nature, for community members, and for developing partnerships. They talked about their junior ranger program and gender equality too. 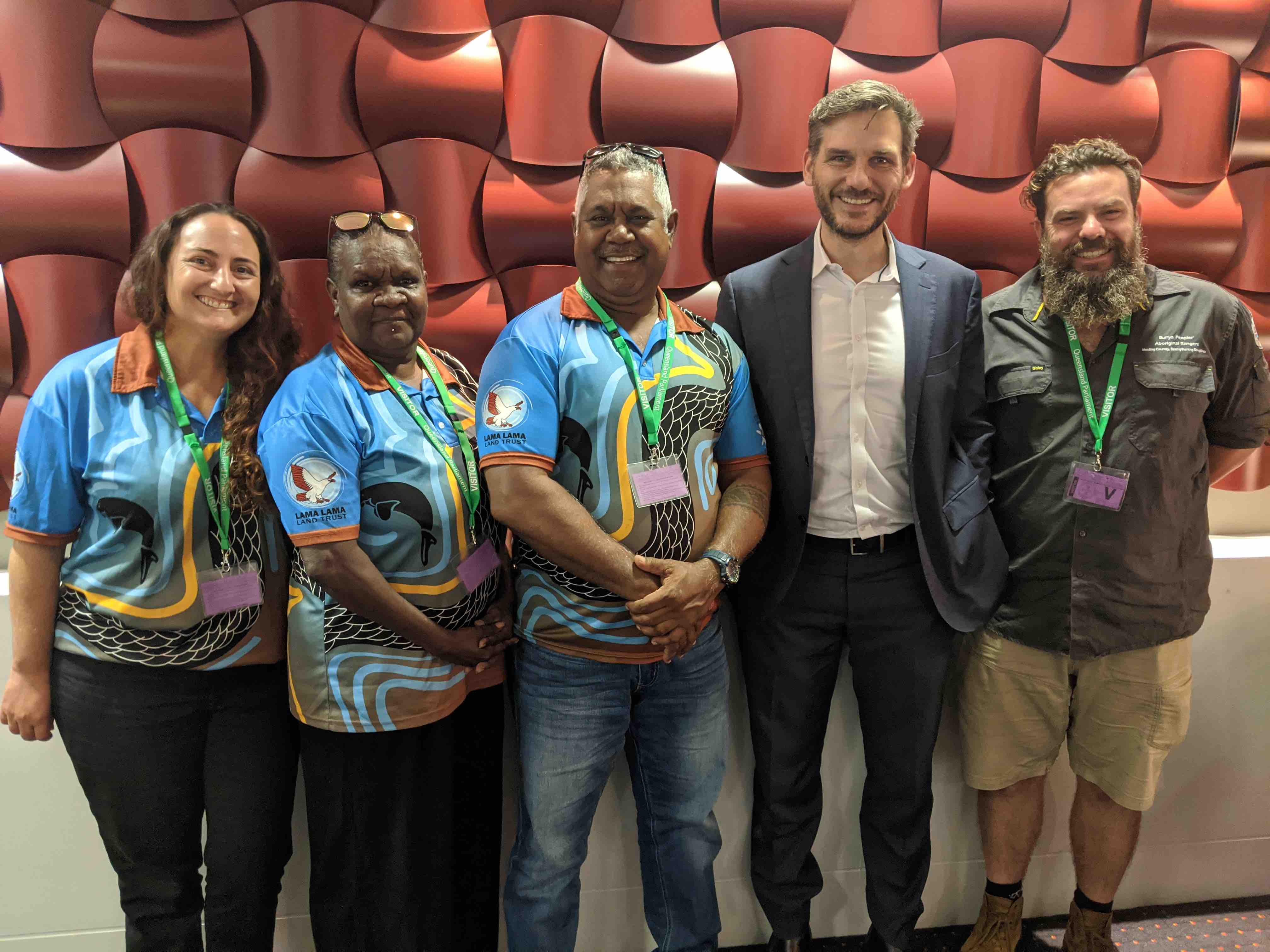 “It’s us rangers leading the way for young people, and they know when they’re older that they’ll lead for country and culture too,” Karen Liddy, ranger team leader and chairperson of Lama Lama Land Trust (second from left). Here, Karen and other members of the delegation are meeting with Greens MP Michael Berkman. The Greens have announced a policy which includes 200 new Queensland Indigenous ranger jobs.

The Lama Lama team were keen to reiterate the need for proper operational funding to match Indigenous ranger jobs. Employment is important, but work can be hampered if there are not sufficient resources like vehicles and land management equipment to ensure everyone is working most effectively. 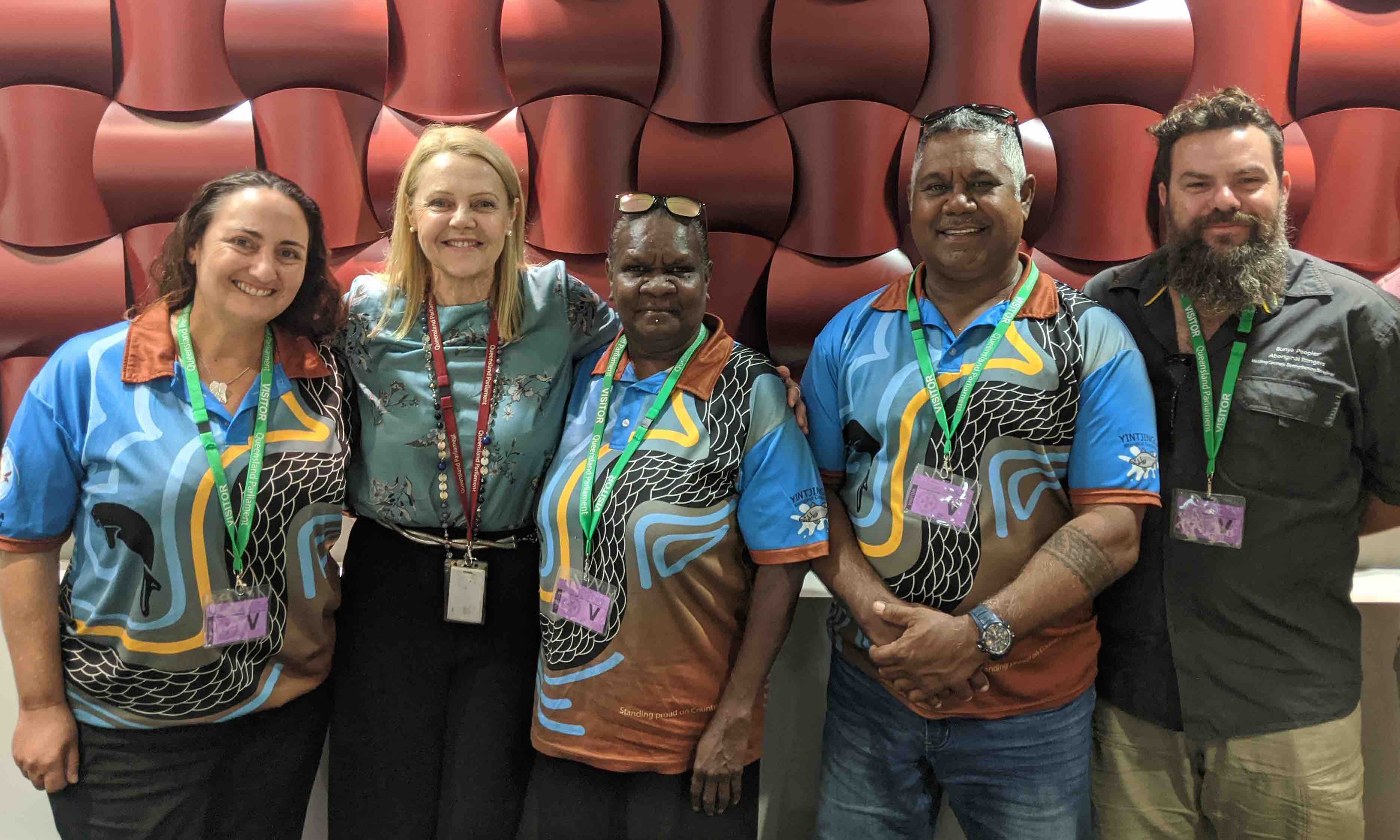 The work of Indigenous rangers across Queensland received strong endorsement from all the parliamentarians we met.  We were pleased to hear the welcome policy announcement to triple ranger numbers by the Greens, and we’ll be looking forward to hear what specific commitments for growth of the program the major parties might develop after the constructive discussions we had.

Join us in calling on all parties to grow and secure Indigenous ranger jobs in Queensland by signing our petition here.